Passion-Based Research in High School: Is This What It Means to be Career-College Ready?

This is going to be messy.  It also is necessary.

I tweeted this and the folks at PARCC responded: 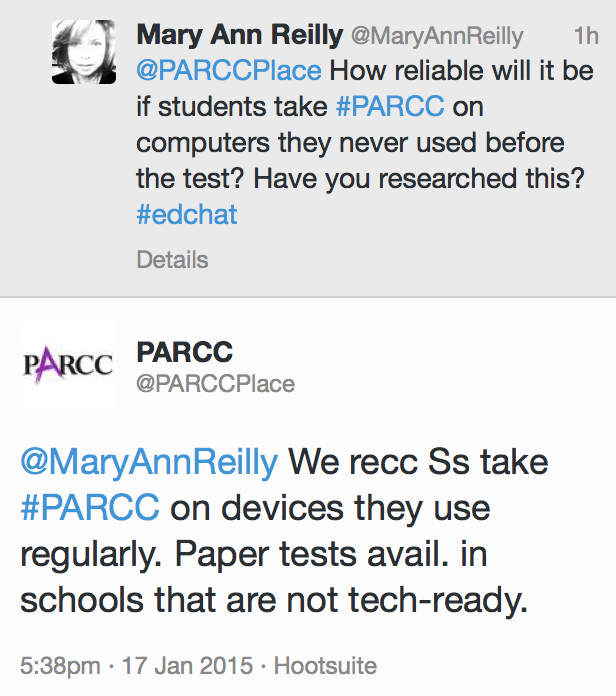 The question wasn't about what they recommended, but rather it was about whether they had researched the reliability of test data when students take an assessment that requires them to interact with text on machines they have not used before.  I'm wondering if the absence of an answer means they don't know. Shouldn't they?

So, I was wondering how valid will these test results be when received next September from PARCC testing?  I was wondering what instructional, personnel, and system-wide decisions will be made based on these test results.  What will be missed/misused?  Who will be fired? Retained?  Which truths will be lies? Which lies will make for better truths?  How can we know anything about academic progress given such uncertainty?

Why are we paying billions for this?

Give the public a bunch of numbers, add the passage of some time, and slippery half-truths become gospel.  We have seen this repeatedly. We have drunk deeply from that goblet.

Surely there are better ways to know how young people are progressing on agreed upon set of outcomes. Cue the science (or insert another discipline/maker) fair.

This past week my son completed research he presented at his high school's science fair. He built a computer, outfitted it with an energy efficient power supply unit and compared the efficiency savings generated by his top end power supply unit with mid-range and inexpensive units.  He found that if desktop computers in US households (based on 2009 figures) running only on average for 2 hours a day were kitted out with the power supply unit he used with his computer, even though the initial costs would be more than the less expensive models, the savings alone in the first year would near half one billion dollars in comparison with the least expensive power supply units. Of course those savings would increase with more usage. Further this energy efficiency would also positively impact our globe environmentally.

This is what he found:

For the last month he worked on his project and I watched as his interest in his hypothesis intensified and noticed he was working on different aspects of this project late into several evenings.  I know what it is like to catch fire with an idea and want to follow it.

Catching fire and following an idea is more about being career and college ready than answering multiple choice and open-ended questions on a test--regardless of the test's quality. The complexity inherent in designing and testing a hunch trumps the closed and largely predictable world of high stakes school tests.  I was pleased to see my son generate and follow a question to a conclusion.  I know this is an important thinking disposition.

This is what passion-based research looks like. This is worth our tax dollars.

My son's project was awarded first place at the fair.  He was proud of his work, as were we.  You need to know that prior to this year, my son has not done well at school since 3rd grade. His name is not one you would have found on any honor roll.  This is a boy who calculated how many miscues to make on the Developmental Reading Assessment (DRA) when he was 9 so that he could stop being tested and go back to reading.

Agency, known constraints, and deep interest aided the development of his project and his adult life. I recall a few months ago when he told me that he does not see his future as defined by a specific career.  He wants to solve problems.

On most assessments doing well, like scoring high or winning first place, often signals an end.  What is perhaps most significant is the aftermath of this project. The judges who evaluated the projects were external to the school.  The science teachers also engaged with each student during the fair and evaluated the work, including the presentation through dialogue.

But feedback did not end with the judges or the teachers. Because the fair was open to the public and students were present to discuss their thinking, newer ways to think about the project were possible. Some of the people (parents, teachers, fellow students) who stopped by my son's display helped him to rethink aspects of his work.  For example, he had not factored the energy use of servers into his calculations.  He also had used figures from 2009 for the total number of desktop computers in the United States as those were the only ones he could locate.  He realizes now that each of these weakened his findings.

He told us tonight that he would be interested in repeating his study, including a larger range of devices, such as servers, laptops, and  handheld devices. He is curious as to what the savings might actually be and how these savings might environmentally, economically, and politically impact our earth.

Towards the end of the evening, a statistician who stopped by his project told him that they pay a department do to the work he had done.  Sounds a bit like being career ready, yes?

Imagine now if the billions in tax dollars we systematically feed to companies to provide test development, scoring, and the plethora of test prepping materials, as well as the personnel dedicated to test preparation were shifted to the development and critique of student-determined projects. Imagine how different learning and assessing might be. Yes, it would be messy--as it would make us rethink how time is valued and used at school, the shifting and unstable divisions between being at school and not at school, what types of learning supports are necessary and for whom, and how tacit ways of knowing could be valued and perhaps coded.

Such a shift, from assessing with tests to learning through projects, will be messy.  Undoubtedly though, such a shift is well beyond necessary.