I. Thinking on Your Feet

Here's the thing I don't quite grasp--why is guided reading so hotly debated and often debated by people who don't seem to actually teach? Now I admit that I get some of the problems folks have with 'guided reading' as there seems to be a lot of rules about book choices, book levels, lesson planning, length of lesson, and other dos and don'ts. These rules often obfuscate our role which gets lost among the clutter.

When we guide reading, we act as Vygotsky's more knowledgeable other, scaffolding readers' attempts at making meaning while problem solving.

It's a think on your feet role. It's privileged work.

Now, I'm not suggesting that it's easy to do. I get how comprehension is complex and anything human ups the complexity meter significantly.  I mean I just spent the better part of a week figuring out how I might engage middle and high school English teachers in Walter Kintsch's (1998) Construction and Integration Model (Comprehension: A Paradigm for Cognition) so that the theory can be embodied.  I just have to finish cutting 40 strips of paper, collect a bunch of scissors, pencils and tape so we can make, mark (center line or two parallel lines) and cut Möbius strips and use these to ground Kintsch's theory.

Look,  anyone who uses a Magritte painting as the cover
for his cognitive science text already has my attention.

II. The Possibility of Hope: Gaiman's Hansel and Gretel in 5th Grade

So I will be modeling a few guided reading lessons with intermediate grade students during the next few weeks.  I have decided to push at the boundaries of text selection by using books I think the students will love because they are catalysts for thinking.

That's my criteria. I want them to love books that help them to unlearn, unfix, unsettle.

As I have said in other posts, I am less concerned about text level or lexile level as all of these students are well past emergent and early reading stages. I'm more concerned about the quality of thought that the text they compose might occasion.

With some fifth graders, I am thinking that Neil Gaiman's (illustrated by Lorenzo Mattotti) newly published Hansel and Gretel looks so promising.  I plan to read it on Monday when a copy of the book arrives.

Here's how he opens the work: 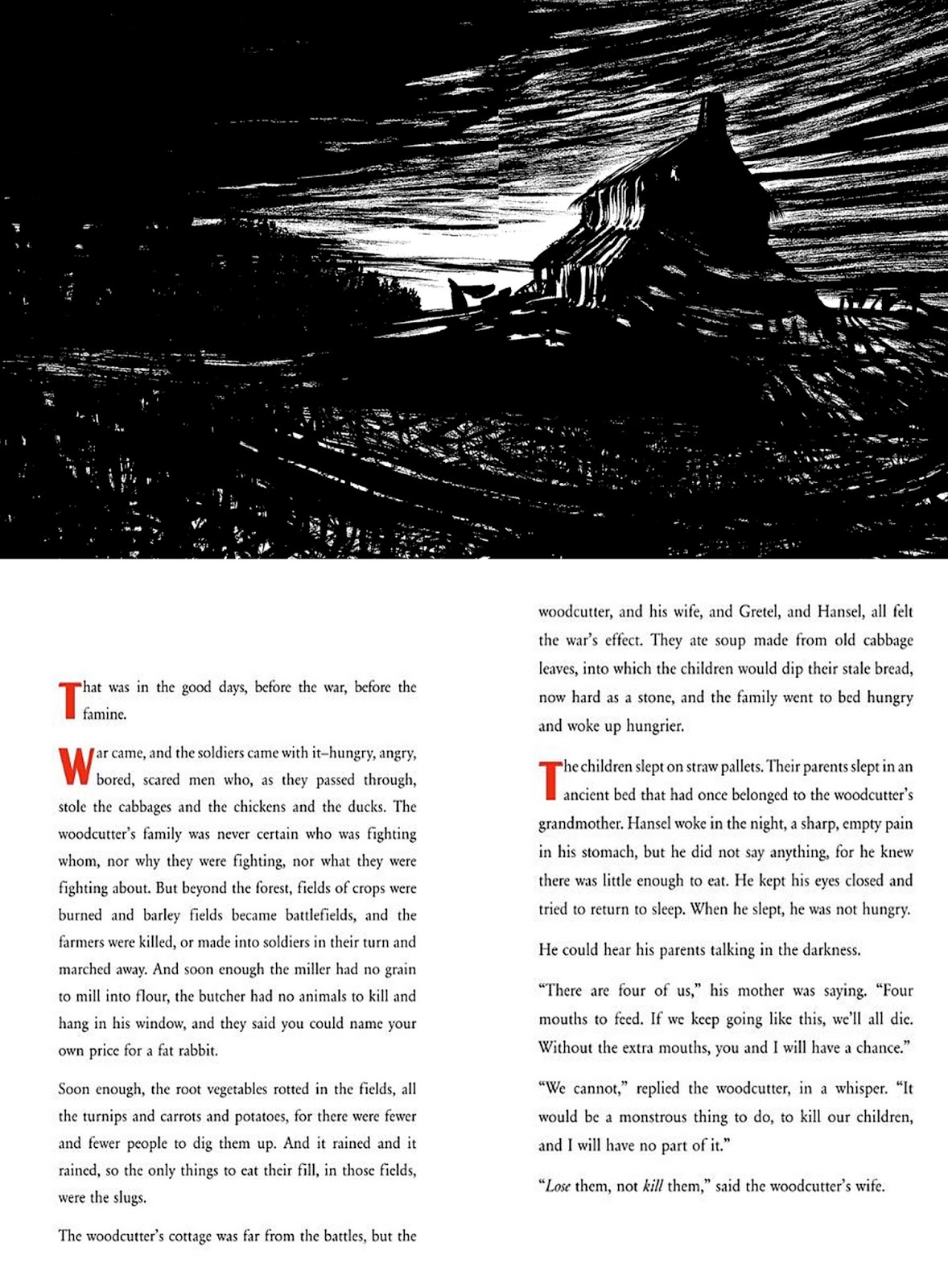 I'm wondering what the group of students I have in mind ( I met them last Wednesday) will make of Gaiman's sparse language or the darkness of the illustrations or the dropped-cap letters in red--the only source of color.   How do these contrasts echo potential themes a reader might make from the work? Is form here an extension of content? What might this text suggest about love and its limitations and excesses?

Do we live, metaphorically, at the edge of the great forest?

There's so much waiting here for us. And that's the point.


III. Grade 3: Fireflies and the Price of Moonlight 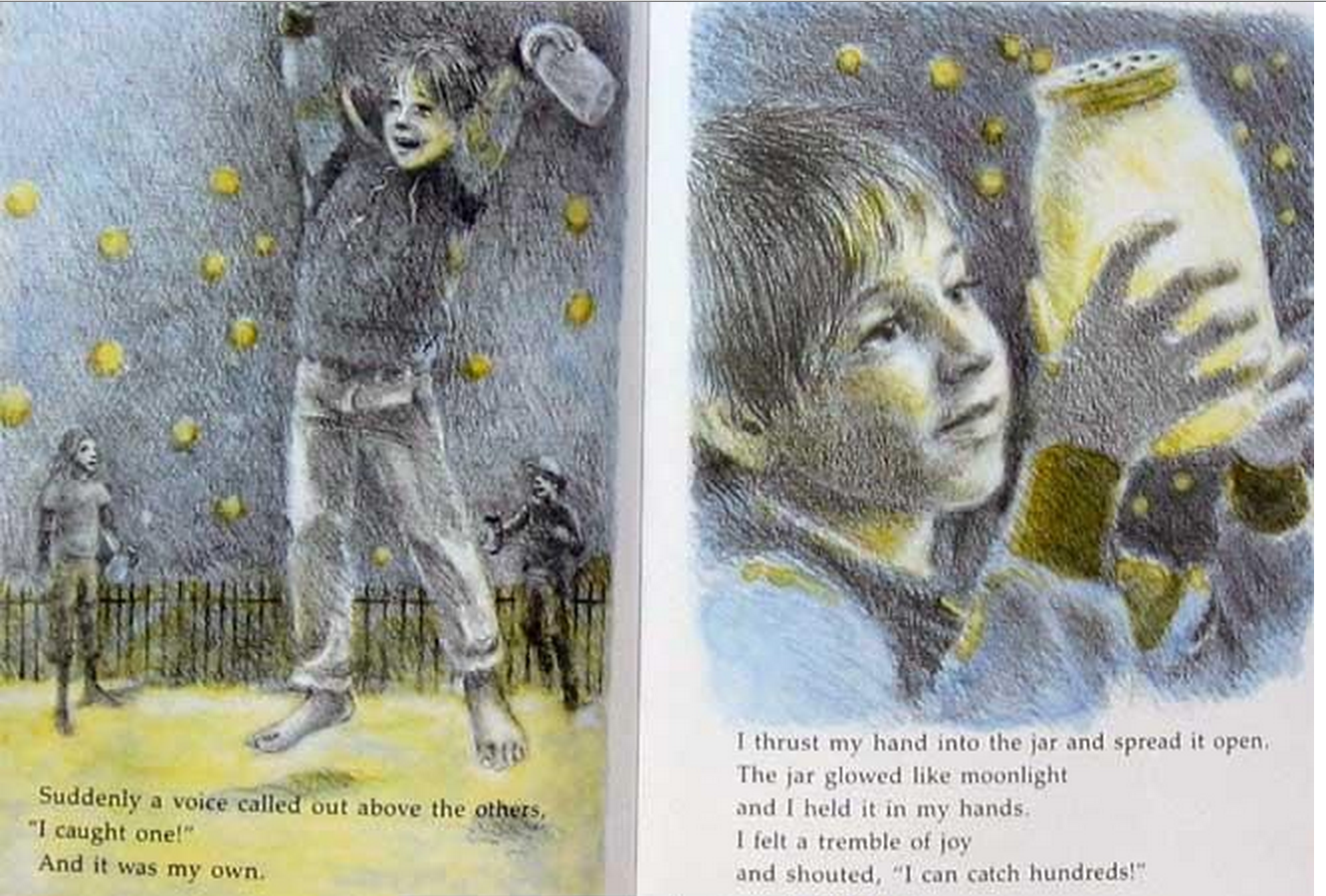 With some amazing third graders I have taught for the last few years, I want to introduce them to Thoreau (they have learned to walk like Gandhi) and decided to pair D.B. Johnson's Henry's Night, with Julie Brinkloe's Fireflies.

Brinkloe's text chronicles a young boy's joy that comes from filling a jar with fireflies he has caught and then confronting a difficult and necessary choice he will make.

Johnson's text, the fifth in the Henry series, channels Henry David Thoreau as a bear whose restlessness one evening has him taking to the night (walking of course) with a jar of fireflies to light his way in search of an elusive bird.

What escapes us often interests us.

Both texts are beautifully written (lots of figurative language) and Johnson's angular art is as inviting as it is compelling. I'm curious as to what the children will make of each text and the effect from placing them side-by-side.  What might Henry think about the young boy's capture and release of fireflies? How might the young boy empathize with Henry's desire to find the whippoorwill--a night bird no one sees?

What stuff dreams are made of.