My collection of nonfiction picture books is somewhat eclectic and yet matters of representation rest at the center. Enjoy.

Argueta, Jorge. (2015). Salsa: Un poema para cocinar / A Cooking Poem (Bilingual Cooking Poems). Illustrated by Duncan Tonatiuh. Translated by Elisa Amado. Toronto, ON: Groundwood Books.
I love this series of books that Jorge Argueta has created. This is sure to be a favorite with the children. An ultimate how-to book. You and your students will love making this salsa recipe.

Burleigh, Robert. (2016). Solving the Puzzle Under the Sea: Marie Tharp Maps the Ocean Floor. Illustrated by Raúl Colón. New York: Simon & Schuster/Paula Wiseman Books.I have enjoyed many other books that Burleigh and Colón created.  The two bring us a picture book biography is of Marie Tharp who is credited with mapping the Atlantic Ocean floor. This title was released 1.12.16.

Richardson, Jael Ealey. (2016). The Stone Thrower: A Daughter’s Lesson, a Father’s Life. Illustrated by Matt James.Toronto, ON: Groundwood Books.
This picture book biography of African-American football player Chuck Ealey recounts his early years growing up in a segregated neighborhood of Portsmouth, Ohio and how he became an incredible quarterback, with an unbeaten record in high school and university, yet he would never play professional football in the United States. This book will be released 5.1.16.
Rosa, Sonia. (2015). When the Slave Esperança Garcia Wrote a Letter.  Illustrated by Luciana Justiniana Hees. Translated by Jane Springer. Toronto, ON: Groundwood Books.When I read this opening to the book blurb, I knew this was a book I would want to read. When I saw it was being published by Groundwood Books, I pre-ordered it. The historical importance of this and the art makes it an important text and one that needs to be included in school libraries. This book was published October 13, 2015. Here's the blurb:

In 1770, the slave Esperança Garcia bravely penned a letter to the governor of Piauí state, in Brazil, describing how she and her children were being mistreated and requesting permission to return to the farm where the rest of her family was living. Before she wrote her letter, Esperança Garcia lived on a cotton farm run by Jesuit priests, where she learned to read and write — a rare opportunity for a woman, especially a slave. But one day she was separated from her husband and older children and taken with her two little ones to be a cook in the home of Captain Antonio Vieira de Couto, where she and the other slaves were beaten. In despair, she wrote to the governor about her terrible situation. She waited each day for a reply, never giving up hope, and although she never received an answer, she is remembered today for being the courageous slave who wrote the first letter of appeal in Afro-Brazilian Brazil. 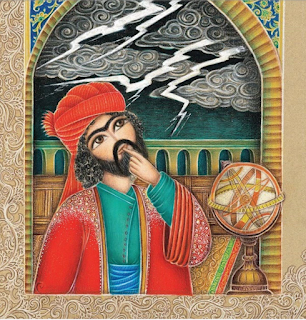 Sharafeddine, Fatima. (2015). The Amazing Discoveries of Ibn Sina. Illustrated by Intelaq Mohammed Ali. Toronto, ON: Groundwood Books.
A picture book biography of Ibn Sina-- a philosopher, scientist and physician who was born in Persian 1000 years ago. Published this past year by Groundwood Books the book is told in the first person making the ideas very accessible to even young readers.  A fascinating history that is often not represented in US schools. I would also recommend the first book in the series, The Amazing Travels of Ibn Battuta.

Tate, Don. (2015). Poet: The Remarkable Story of George Moses Horton. Atlanta, GA: Peachtree Publishers.This picture book biography is about 19th century poet,  George Moses Horton, a North Carolina slave.  He purchased his freedom through his art and wrote about slavery through verse. I am familiar with Don Tate's art work having included his book, It Jes' Happened: When Bill Traylor Started to Draw in an e-book, Making Knowledge in Grade 2 through Read Alouds & Small Group Instruction, that I recently published. This is a link to a reprint of Horton's poetry. This book was published on September 1, 2015.

Tonatiuh, Duncan. (2015). Funny Bones: Posada and His Day of the Dead Calaveras. New York: Abrams Books for Young Readers.I only recently became familiar with Duncan Tonatiuh's picture books--and have enjoyed each that I have read.  I appreciate that he offers insights into important history that is not always included in traditional history books. I included his book, Separate is Never Equal  in an e-book, Making Knowledge in Grade 2 through Read Alouds & Small Group Instruction, that I recently published.  I look forward to learning more about Mexican artist, José Guadalupe (Lupe) Posada and his important art. This new picture book was released on August 25, 2015. I was most surprised with the wealth of information.


Weatherford, Carole Boston. (2015). Voice of Freedom: Fannie Lou Hamer: The Spirit of the Civil Rights Movement. Illustrated by Ekua Holmes. Somerville, MA: Candlewick.It's great to see a picture book biography about civil rights activist, Fannie Lou Hamer. I have admired Carole Boston Weatherford's many books and look forward to reading this one.  She tells Hamer's story in the first person verse. Illustrations are rich. This book was published on August 4, 2015.