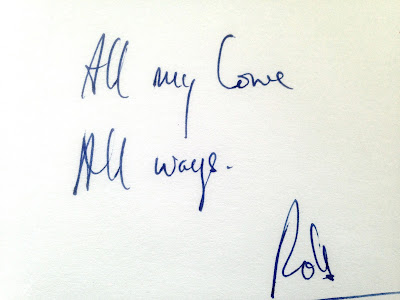 I thought I was writing a story about grief.
All the time it was a love story.
Posted by Mary Ann Reilly at 1:38 AM 4 comments: Links to this post

Online Resources for Literary Works for Middle and High School

An amazing resource.  This magazine publishes short fiction and nonfiction from various authors across the globe. It has been publishing since 2003 and all of the literary work is available online and organized by year and issue.  The September 2003 issue featured writing from North Korea.  You'll want to spend some time searching the archives.

2. Classic Short Stories
Huffington Post has 13 excellent stories linked to this post.  My favorite to teach is "Symbols and Signs" by Vladimir Nabokov.

3. Kelly Gallagher's article of the week
I enjoy the articles he assigns to his students.  They are contemporary.  Here is a link to the archived articles.

4. Links to some short stories:

Idolatry by Sherman Alexie
Bread by Margaret Atwood
Some of Us Had Been Threatening Our Friend Colby by Donald Barthelme
The School 'by Donald Barthelme
Snow by Ann Beattie
Major Maybe by Ann Beattie
Catch the Moon by  Judith Ortiz Cofer
The Cheater's Guide to Love by Junot Diaz
Monstro by Junot Diaz
Miss Lora by Junot Diaz
The Eyes Have It by Philip K. Dick
Black Box by Jennifer Egan
Accident by Dave Eggers
John Redding Goes to Sea by Zora Neale Hurston
When Mr. Pirzada Came to Dine by Jhumpa Lahiri

Year's End by Jhumpa Lahiri
The Ones Who Walk Away From Omelas by Ursula K. LeGuin
Through the Tunnel  by Doris Lessing
Tuesday  Siesta by  Gabriel  García  Márquez
A Very Old Man with Enormous Wings byGabriel  García  Márquez
Cinderella's Stepsisters by Toni Morrison (Essay)
The Bear Came Over the Mountain by Alice Munro
An Astrologer's Day by R.K. Narayan
Wants by Grace Paley
Pumpkins by Francine Prose
In the South by Salman Rushdie
Embassy of Cambodia by Zadie Smith
Oliver’s Evolution by John Updike

5. Links to Ray Bradbury stories: A Sound of Thunder,  All Summer in a Day,  The Happiness Machine, The Veldt, The Pedestrian, There Will Come Soft Rains, The Murderer, The Drummer Boy of Shiloh,

6.  Next Generation Press (non-profit):  These excerpts are from the book, Hip Deep: Opinion, Essay, and Vision from American Teenagers.  Brief writings by teens for teens. This is an interesting press and features teens voices from across the globe. FORTY-CENT TIP: Stories of New York City Immigrant Workers are texts written by NYC teens from three high schools. You can preview the entire book here.

7. Narrative Magazine Since 2003, this online magazine has been publishing literature online. An extensive archive can be searched. This is a favorite site.

Posted by Mary Ann Reilly at 6:12 PM No comments: Links to this post

A book a child can hold in one hand.  An illustrated guide for making by composer John Cage. Simple illustrations.

Honestly who would have ever thought that a picture book about Walter Benjamin would be written. Top of my list. The tragic story of the philosopher, a victim of the Nazis, is told well and illustrated with lots of energy portrayed.

It is the perspective that most captures my attention in this account of a simple walk in a forest. 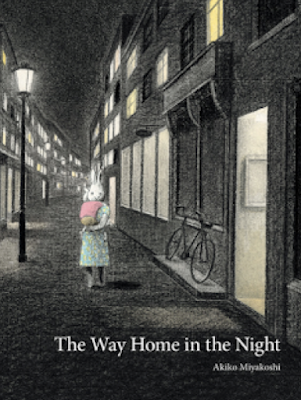 A soft, gentle nighttime story. The art, like usual, is subtle and lovely. I love all of her books. This is no exception. Dreamy. Aesthetically pleasing and oddly familiar. 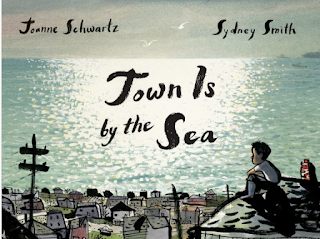 Schwartz, Joanne. (2017). Town Is By the Sea. Illustrated by Sydney Smith. Toronto, ON: Groundwood Press.

In praise of miners, this gentle picture book set in the 1950s in Canada tells the story of a young boy who moves through a typical day while his dad mines for coal under the sea. Moving.

An exchange of written notes between a mother and her daughter is construct for this very lovely story about going away for the first time. Perhaps, the tenderness resonated all the more as my son, no longer a child, is poised to start his life away too. 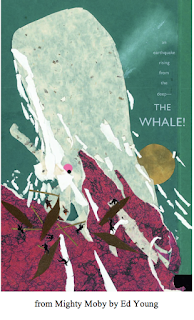 I thought this might be a retelling of Moby Dick and in many ways it is. But it is done with a twist and of course, Ed Young's illustrations are breathtaking.

Posted by Mary Ann Reilly at 7:27 AM No comments: Links to this post

It takes a little more than ten minutes to play Samuel Barber's Adagio for Strings and it may well be the saddest and most glorious music I have ever heard. It's best reserved for days that are cloudy, threatening rain. I was listening to the piece two weeks ago when my oldest brother showed up, sawzall in hand, and said he would take the play set apart. I had mentioned the previous week wanting to take it down as I readied the house for sale. It took Jack, Devon and I most of that day to take apart the large wooden play set.

Imagine hearing Barber's music and you'd have a fair representation of how I felt after the play set had been sawed apart.

We moved the pieces to a new location on the lawn: the small slide that used to fit Devon's body just right, the two benches and table where we ate peanut butter and jelly sandwiches for lunch, the climbing bars Devon would swing from, the two swings Rob and I sat on moving back and forth as Devon commanded his world from the top of the set behind the acrylic bubble. Later that day after Jack left for home and Devon went upstairs I called a junk remover and set a date for these bits and pieces of my life to be taken away.

Now it is gone and the space left behind is large, looming, and mostly just empty.

Rob and I bought that large wooden play set when Devon was four-years-old and money was more scarce then not. One Saturday afternoon we watched from the deck as men assembled the set in the rear yard. We had moved into the new house the previous year and for the last fourteen years it has sat like a sentry in a corner of the rear yard.

Some days, Rob's death hurts in ways hard to name for somehow in the sting of all of that pain, time somehow moved on.

Posted by Mary Ann Reilly at 12:00 AM 6 comments: Links to this post

Faith
is the bird
that feels the light
And sings
when the dawn
is still dark.


It was decades ago when I first heard Rob, the man who I would later marry, read a poem, "Faith," that he had written. I was in the basement of an old mill in Paterson, NJ--one of many in the audience that night. We had gathered to hear poetry read aloud. We were moved by the narrative in Rob's poem that chronicled  a neighborhood in Hell's Kitchen--a neighborhood he knew so well.


Posted by Mary Ann Reilly at 12:00 AM No comments: Links to this post

18 Children's Books about Photographers and Photography


Posted by Mary Ann Reilly at 8:30 AM No comments: Links to this post

BobBlast 166 — "Why I Collage Before Painting."

BobBlast 95 "Drawing Back onto an Acrylic Painting

Posted by Mary Ann Reilly at 12:30 PM No comments: Links to this post

"On starless nights, one can feel like a loose array of limbs and purpose, and seem smaller, limited to what one can touch."   ― from Diane Ackerman's  "Dawn Light: Dancing with Cranes and Other Ways to Start the Day"

It was time to let go of our house where light fell through familiar windows and each creak of the staircase I knew by heart. It was time to pack away all that could not be carried further. Such cargo weighed too much and I carried it too far. Some truths took greater time to surface. Sea deep. They resided where sunlight did not penetrate. Oceanographers called this the bathypekagic zone. Poets knew it as the midnight zone. I, like every other widow, simply called it the blue-black absence of love.

Across the last two years, grief remained a spiraling affair.  At times a darkness rose up to reclaim and then release me. Claimed and released over and over and somehow each time the sudden pain of it stunned me. The center I once knew by heart was blown wide open after Rob died making it hard to find my balance in the dark.

And yet, I stood
at the open window tonight
where the fall of late light
felt familiar,
memories remained bittersweet,
and the sharp desire to be still
pressed against a need to move.

Grief was a tension
that rose between then and next
leaving me only a slim truth:
Rob was dead and I was not.

Outside the window
a pair of cardinals settled
on the limb of a bare tree
just beyond my reach
and sung to me.

As I listened even the darkness felt warm.

Posted by Mary Ann Reilly at 12:00 AM 4 comments: Links to this post