Today, I have been reminded of the immense loss I will feel when Rob dies.  Every point in my life is connected to him. Every one.  From things as mundane as the food store, the diner he frequented, the dry cleaner, a former students now finishing at Reed College. Everyone in each of these places asks, "How's Rob?"

At the diner, the waitresses cried when I told them he was at home in Hospice care. One said, "I've had so much loss this last month. I can't take this. He was so robust. So full of life." She could not take our order at first as she started crying and excused herself. Another waitress who tried to help next asks and after I tell her she says to my son, "You need to help your mother through this." When our waitress returns she wants to send home some food for Rob and I explain that he has stopped eating and she excuses herself again as she starts to cry.

Our dry cleaner yells, "No. That just can't be." Our friend, Mo from a local taxi service texts me, "How is Mr. Rob?"  He too expresses disbelief that someone as vital, as loved, as essential as Rob could be dying. "That's not possible." At the food store, the same man who waited on us most mornings when we would run in to get some treat to bring to a client's, tells me,"I'll pray for you and your son. Such a fine man" A neighbor who just sold her home and is leaving to relocate to Florida embraces me this morning in the street as her new husband waits in the car. "I can't believe it. Not Rob." 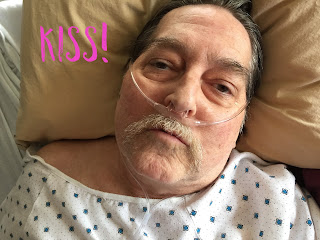 But it is Rob.  It is Rob It is. My husband who loves widely, forms relationship with ease, and genuinely loves others. How could this have happened to him?

There isn't a day that goes by since he was first diagnosed that I don't sob several times throughout a day. The feelings overcome me and it's like a faucet turns on full pressure. Mostly though I am either numb or sick to my stomach.  The one place I find consistent contentment is when I sit next to my husband's bed, write, and wait for him to wake up, turn to me and say, "Kiss!"
Posted by Mary Ann Reilly at 5:54 PM