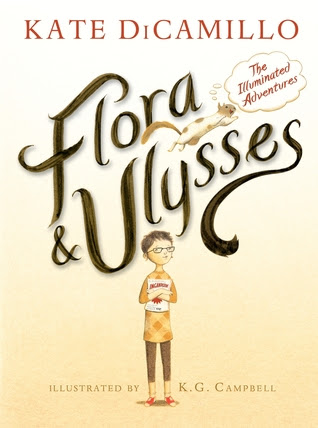 ** John Newbery Medal for the most outstanding contribution to children's literature: 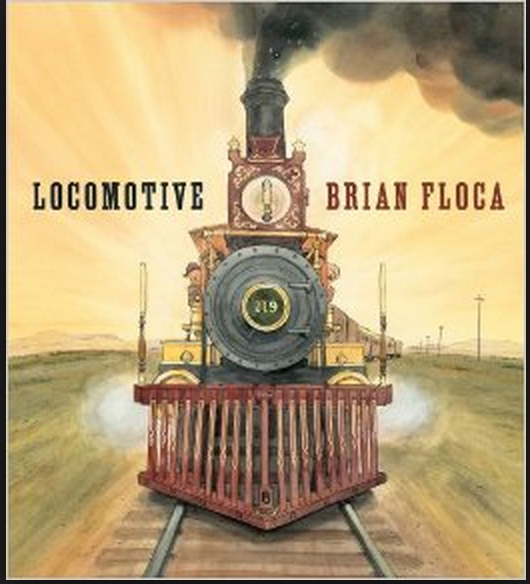 ** Randolph Caldecott Medal for the most distinguished American picture book for children:

“Locomotive,” illustrated by Brian Floca, is the 2014 Caldecott Medal winner. The book was written by Brian Floca and published by Atheneum Books for Young Readers, an imprint of Simon & Schuster Children’s Publishing.


Note:  Debbie Reese's blog post, About "diverse" books and inclusivity in Brian Floca's LOCOMOTIVE, offers a compelling insight into the text and challenge to the text. Well worth reading. 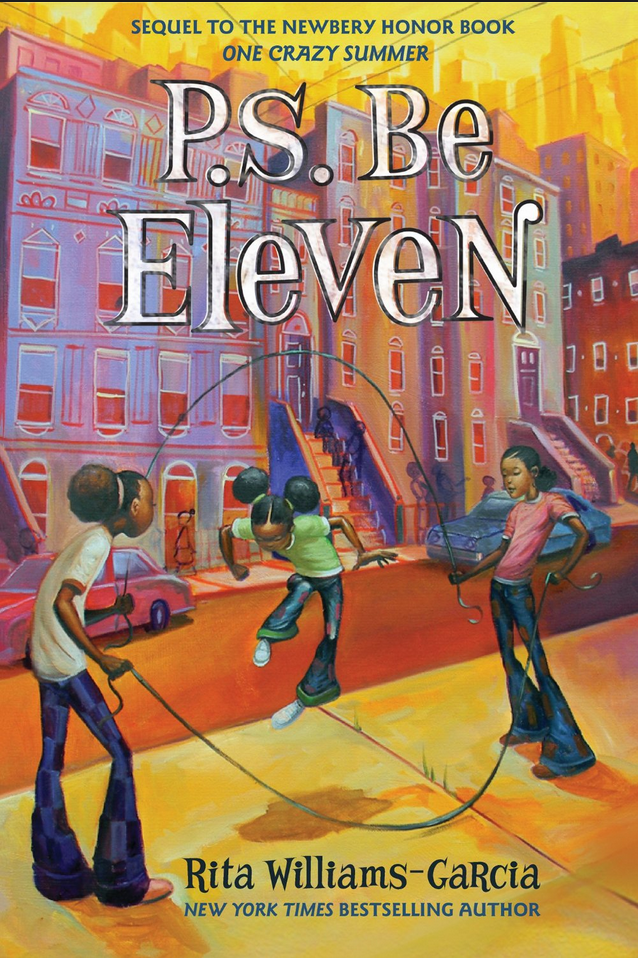 “P.S. Be Eleven,” written by Rita Williams-Garcia, is the King Author Book winner. The book is published by Amistad, an imprint of HarperCollins Publishers.
Three King Author Honor Books were selected: 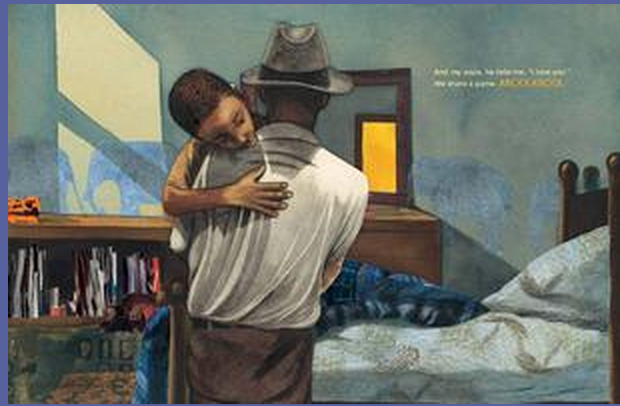 “Knock Knock: My Dad’s Dream for Me,” illustrated by Bryan Collier, is the King Illustrator Book winner. The book was written by Daniel Beaty and published by Little, Brown and Company, Hachette Book Group.
One King Illustrator Honor Book was selected: “Nelson Mandela,” illustrated and written by Kadir Nelson and published by Katherine Tegen Books, an imprint of HarperCollins Publishers. 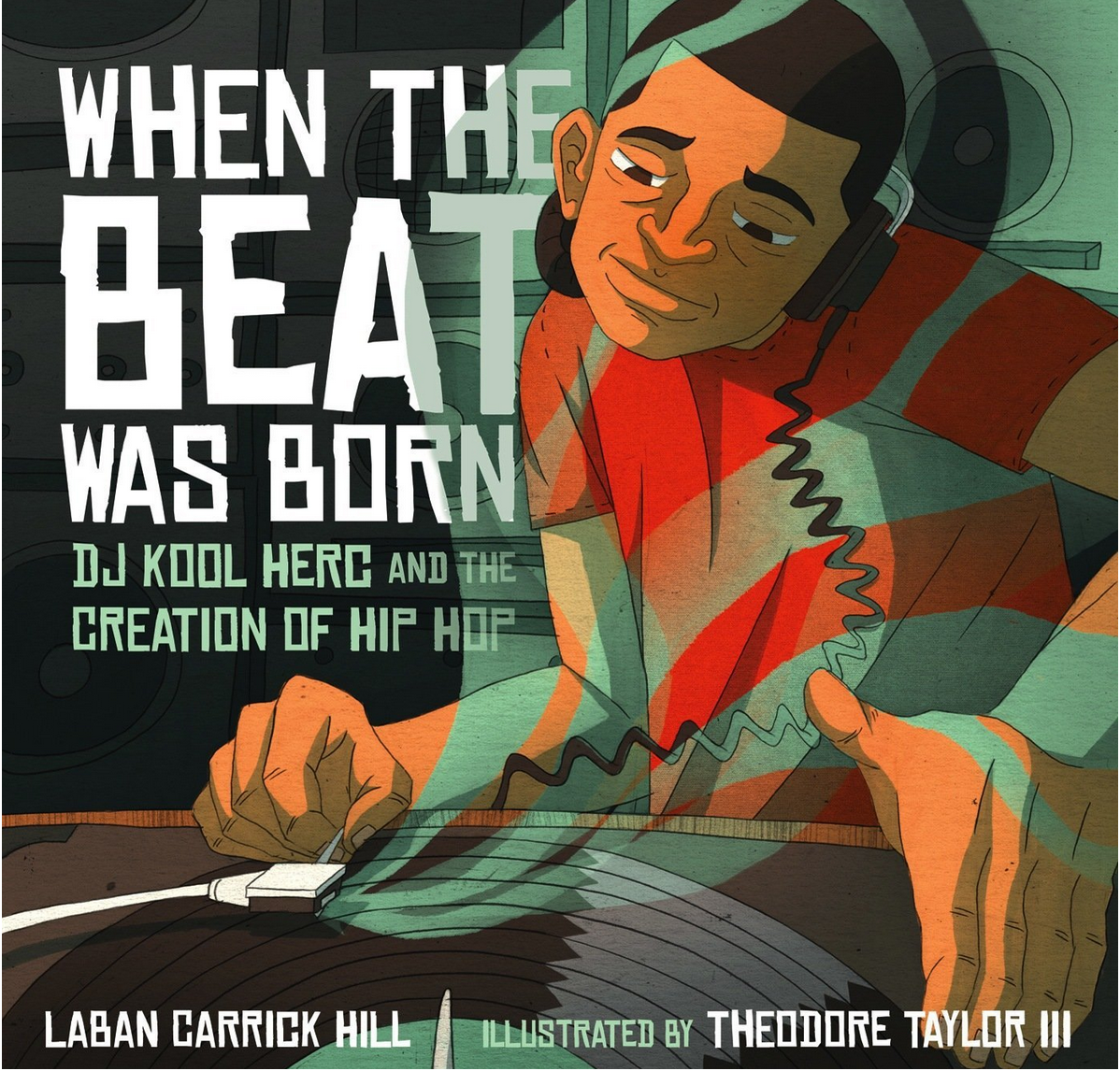 “When the Beat Was Born: DJ Kool Herc and the Creation of Hip Hop,” illustrated by Theodore Taylor III, is the Steptoe winner. The book is published by Roaring Brook Press, a division of Holtzbrinck Publishing Holdings Limited Partnership. 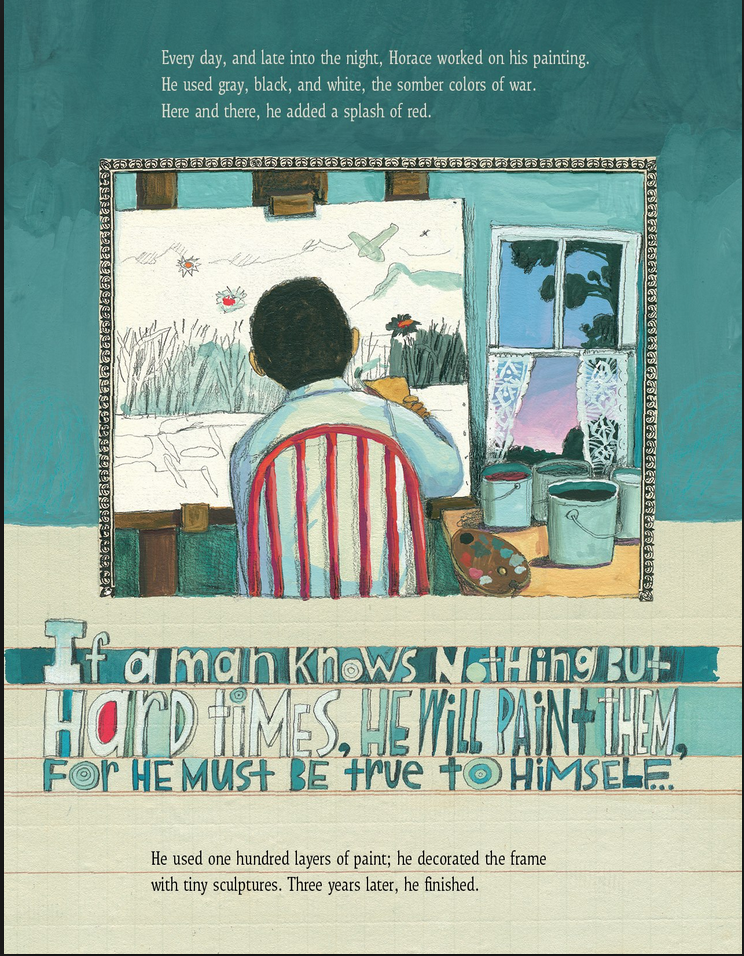 ** Schneider Family Book Award for books that embody an artistic expression of the disability experience:

“A Splash of Red: The Life and Art of Horace Pippin,” written by Jen Bryant, illustrated by Melissa Sweet and published by Alfred A. Knopf, an imprint of Random House Children’s Books, a division of Random House, Inc. wins the award for children ages 0 to 10.
“Handbook for Dragon Slayers,” written by Merrie Haskell and published by HarperCollins Children’s Books, a division of HarperCollins Publishers, is the winner of the middle-school (ages 11-13) award.
The teen (ages 13-18) award winner is “Rose under Fire,” written by Elizabeth Wein and published by Hyperion, an imprint of Disney Book Group.


** Alex Awards for the 10 best adult books that appeal to teen audiences:


** Margaret A. Edwards Award for lifetime achievement in writing for young adults: Markus Zusak is the 2014 Edwards Award winner. His books include: “The Book Thief” and “I Am the Messenger,” published by Alfred A. Knopf, an imprint of Random House Children’s Books, and “Getting the Girl” and “Fighting Ruben Wolfe,” published by Arthur A. Levine, an imprint of Scholastic. 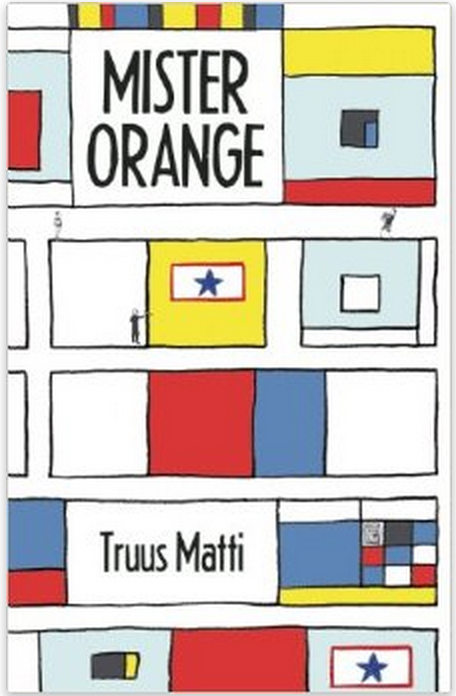 “Mister Orange” is the 2014 Batchelder Award winner. Originally published in Dutch in 2011 as “Mister Orange,” the book was written by Truus Matti, translated by Laura Watkinson, and published by Enchanted Lion Books. 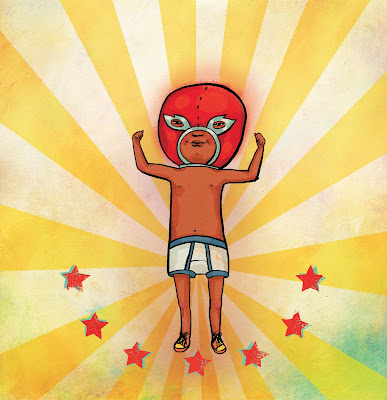 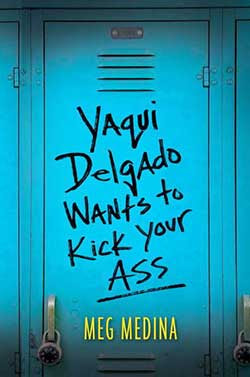 “Pancho Rabbit and the Coyote: A Migrant’s Tale,” illustrated and written by Duncan Tonatiuh and published by Abrams Books for Young Readers, an imprint of ABRAMS.

“Parrots over Puerto Rico,” written by Susan L. Roth and Cindy Trumbore, and illustrated by Susan L. Roth, is the Sibert Award winner. The book is published by LEE & LOW BOOKS, Inc. 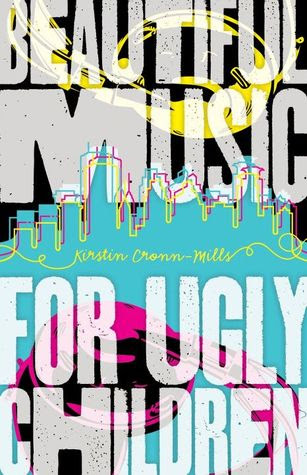 “Beautiful Music for Ugly Children,” written by Kirstin Cronn-Mills and published by Flux, an imprint of Llewellyn Worldwide Ltd; and “Fat Angie,” written by e. E. Charlton-Trujillo and published by Candlewick Press, are the winners of the 2014 Stonewall Children’s and Young Adult Literature Award.
Three Honor Books were selected: 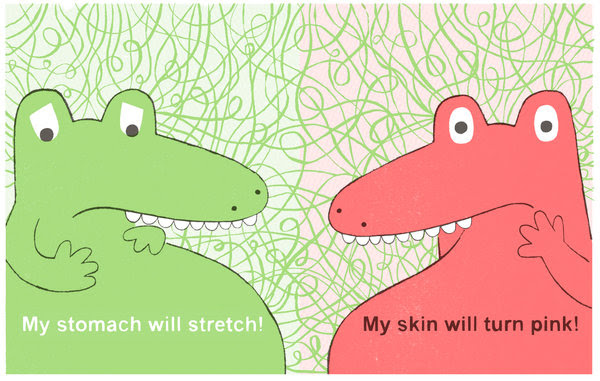 ** Theodor Seuss Geisel Award for the most distinguished book for beginning readers:

“The Watermelon Seed,” written and illustrated by Greg Pizzoli, is the Geisel Award winner. The book is published by Disney Hyperion Books, an imprint of Disney Book Group.
Three Geisel Honor Books were named: 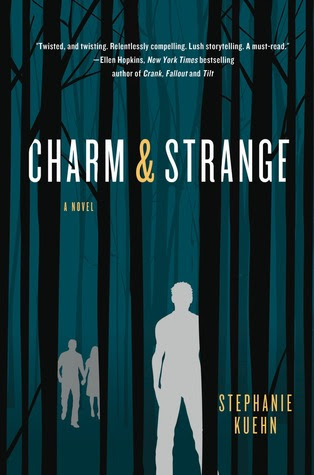 ** William C. Morris Award for a debut book published by a first-time author writing for teens:

“Charm & Strange,” written by Stephanie Kuehn, is the 2014 Morris Award winner. The book is published by St. Martin’s Griffin, an imprint of St. Martin’s Press, a division of Macmillan.
Four other books were finalists for the award: 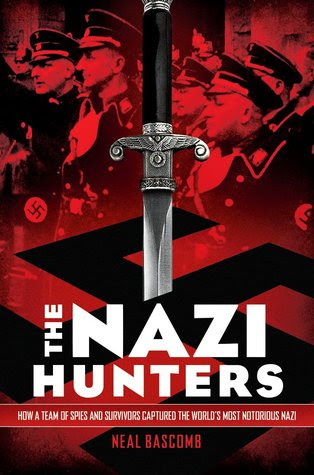 ** YALSA Award for Excellence in Nonfiction for Young Adults:

“The Nazi Hunters: How a Team of Spies and Survivors Captured the World’s Most Notorious Nazi,” written by Neal Bascomb, is the 2014 Excellence winner. The book is published by Arthur A. Levine Books, an imprint of Scholastic Inc.
Four other books were finalists for the award:

This past week has been thought provoking.  Earlier in the week I conducted a full day inservice with a principal and a dozen teachers, many of whom I have worked with during the last two years.  I so believe in the work they are committed to doing on a daily basis at this southward school in Newark, NJ.  I work with this staff on a monthly basis and this week we closed the session by viewing a brief film that portrayed learning at a public school in Brookline, Massachusetts.  After the video ended, the principal paused and then spoke with the teachers about how she has to be mindful when she sees videos of other children learning to not minimize the potential of that learning because the children portrayed are living in such safer situations than the children who attend her school.  She said,


I'm thinking that those children in that classroom all ate dinner the night before.  That they did not have to walk past multiple murder sites from the last few weeks on their way to school.  I have to remind myself that our kids can learn as well too.

To contextualize the principal's comments find below an image of a map that chronicles murders during the last year that happened where this school is located (map includes an adjacent city).

So I have been thinking about the kids at the school who arrive hungry, who arrive scared having travelled streets many adults would fear to tread, who arrive ill lacking the resources for medical care.  I can recall sitting in an 8th grade classroom at this school last spring when one girl reading from her notebook told about a shooting that had taken place up the street from the school the day before. Another child read about being the only surviving male in his family having seen his brother and cousin each killed within the past year and the weight of those deaths on him and his mother.  All of this weighs and I find myself thinking about the school solutions that are routinely offered (longer school days, longer school years, rigorous curricula, CCSS implementation, teacher education and evaluation) and I want to shout, Time Out!

This is not to say that those routinely offered solutions are good or bad, but rather that they often obfuscate the larger problem of racial income inequality that we don't seem to talk about very often and certainly do not entertain it as a viable solution to what ails us.

So all of this was on my mind when I sat down earlier today to read the Sunday NY Times and found Sam Polk's rather narcissistic essay, For the Love of Money, gracing the cover of the Sunday Review. Polk, a former hedge-fund trader, situates his rather obscene desire for money (laments the smallness of a $3.6 million bonus) as an addiction--as if such maneuvering might recast the capitalist society that in many ways is responsible for producing the crime-ridden and hungry-child neighborhood I first described at the start of this post as something akin to a personal addiction problem that has now been conquered. Sam Polk is all better. There's no ownership in what his actions wrought.  There's no acknowledgement that the very bonuses he was given came on the back of the middle class and poor and have helped to create the abject poverty and hopelessness in a city where 111 murders have taken place this past year.  Rather Sam Polk has authored an all about me essay that only the disillusioned wealthy could write and sadly the NY Times could print.

I was reminded while reading Polk of the end of The Great Gatsby where Nick Carraway muses:


I couldn't forgive him or like him, but I saw that what he had done was, to him, entirely justified. It was all very careless and confused. They were careless people, Tom and Daisy – they smashed up things and creatures and then retreated back into their money or their vast carelessness, or whatever it was that kept them together and let other people clean up the mess they had made […]. (9.136-145)

It's this extreme carelessness of hedge-fund traders and market speculators who make money out of hunger that is most disturbing.  They harm you and me, our kids, our neighborhoods, our country with little regard, if any, for their actions beyond how their actions influence their rather petty selves.  The end of Polk's essay has an almost Jonathan Swift  Modest Proposal feel to it--if only Polk was writing satire.  Polk has traded his hedge funding which creates income inequality for now helping the poor he helped to make manage their obesity and food addictions. Yes, you have read that correctly. His new nonprofit, Groceryships, is designed "to help poor families struggling with obesity and food addictions."

Seeing Differently with a Phone

I love how the camera on the phone I use shapes how I see--gives rise to new meanings of the ordinary. Technologies extend and constrain us and in doing so repeatedly often situate values as given truths.

Thoreau wrote, "The question is not what you look at but what you see."  This is a central tenet to making images, as opposed to just taking photographs. I enjoy the tension that happens when the technologies I use to make images are so different from one another.  There is vast world of difference that emerges when I shoot with a Nikon, a Leica, or my iPhone.  Exploring these differences affords me the opportunity to see differently.

This points to the importance of agency. The decision as to what tools to use are better left in the hands of the maker.

Below is a collection of images made during the last year using an iPhone and most often the Hipstamatic app.