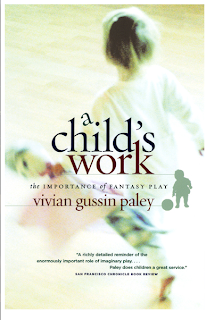 I was so moved when I read this chapter about Simon a four-year-old child who had been labeled autistic. The text was written by Vivian Paley and recorded in her book, A Child's Work: The Importance of Fantasy Play. It is a most remarkable story about human connections, the possibility of story, and the the need to see beyond labels.  It always irks me when a child is referred to as x ( you can fill in the x) as if the sum of the person could be located as a single descriptor. I think of this often when I hear educators refer to children as bilingual or special education. I wonder if labels don't work to limit what we observe and our capacity to come to know, and in doing so allow us to substitute a false belief that what we think we know represents the whole of it.
I was reading Tom Altepeter's (@tomaltepeter)recent blog post, Intercultural Responsiveness before and the two pieces of writing seemed to reinforce the belief in how important it is to be in the now--to not bring with me a set of already established assumptions or rules.
Both writers inspire me to be a bit better than I normally am. I have recorded the whole chapter as I thought it an important story inside an important book.  The link to the book is included.  On Kindle, the full book costs a little less than $6.00.  Well worth the cost.
From Paley, Vivian Gussin (2005-05-27). A Child's Work: The Importance of Fantasy Play. University of Chicago Press - A. Kindle Edition.
thirteen
simon’s story
Jaime’s use of fantasy play and formal dramatics to bridge our language differences was straightforward and clear. But Simon, another four-year-old whom I met the year before in an Indiana Head Start center, has a more difficult task. He has been labeled autistic and it seems doubtful that he will join the storytelling activities I have come to demonstrate.

The children know Simon well, however, though he paces the room as if he doesn’t see them. “What is Simon doing?” I ask Carly, who is about to dictate a story to me. “He’s a zoo man,” she says. Her tone implies that nothing is strange about the way Simon performs his role.

We watch Simon circle the room, punctuating his orbit with tiny cries and murmurs. His destination is a corner table under which a Lego zoo set awaits him, its plastic animals standing in a row. Once there, Simon crawls quickly to the animals and begins moving them across the tray, whispering to each one until they are all in place on the other side. Then he repeats his turn around the room and the process begins again.

“I think Simon is talking to the animals,” I comment, and Carly nods. “Walk walk,” she says. “He’s tellin’ them to walk.”

There would be much for Simon to observe as he passes around and through his classmates’ activities during “free-play,” if he slowed down and looked. In the blocks, a spaceship is going up, and, next to it, train tracks tunnel under a math table and swing around the doll corner, where a noisy baby bangs on a crib yelling “Mama!” Family members come running, draped in layers of dress-ups and talking into Lego pieces held up to their faces.

Near the sink, children at easels paint large round faces while their neighbors coil long snakes on the clay boards. “This snake is poison,” a boy warns one of the painters. “I’m makin’ him a nest, okay?” the girl responds, painting over the smiling face on her paper with broad purple strokes.

Everywhere are the recognizable scenes and sounds of children making and doing and pretending together. A “Chutes and Ladders” game is crowded with players and onlookers; two tables of children negotiate the use of several rolls of masking tape for their drawings, paper cuttings, and armaments; a child at the computer receives advice from those waiting their turns. Simon weaves through them all and stops for none. His own activity demands his entire attention.

Anthony is next on the story list. “Mine is Dracula,” he tells me and I print Dracula at the top of the page. “I wonder if Simon likes Dracula stories?” I ask. “Probably he does,” is his reply and launches into his story. “This is Dracula and there is a dinosaur and they don’t bite each other because they’re friends.” I can’t help smiling. It’s all about friendship: the play and the stories and the talk. But where does Simon fit in?

After several more stories, the children join me as I outline a stage with one of the rolls of masking tape. It may be the ripping of the tape that startles Simon, or the number of children crossing his path at once, but suddenly he is in our midst, stumbling through those seated along the edge of the tape. Back and forth he wanders, waving his arms until, with a series of shrieks, he returns to his appointed rounds.

“This is Holly’s story,” I say, holding up her paper. “She’s a bird at the top of a tree and she’ll need someone to be the tree, the mother bird, and a fish in the pond.” The actors are chosen in the order in which they are seated, and the story-play begins. I get no further than “The baby bird flies to the tree . . .” when Simon again bursts on to the stage, grabbing Holly’s legs while she continues to flap her wings, barely keeping upright.

“Simon, would you like to be a tree?” I ask anxiously, knowing there will be no response. Holly says calmly, “Simon is different.” She places her hand on his head to steady herself and steps back into her story. She is not annoyed by Simon’s behavior, nor are the other storytellers who follow. The actors carefully step over and around Simon, who now lies on his back moving his fingers across his eyes.

During recess, I remain in the room copying the children’s stories into my journal. Silently Simon reenters the room and carries his zoo tray to the empty stage. I watch as he lines up the animals and I sit beside him on the rug. “Walk walk walk,” he instructs the bear and I add, “The bear walks over the hill.”

Simon stiffens for a moment and glances in my direction. Then he moves the elephant through the blue patch of water and up the hill. His hand stays on the elephant as he waits for me to speak. “Walk walk,” I say. “The elephant walks over the hill.” By the time the children run in, Simon and I have together walked and talked to the lion, the giraffe, and the chimpanzee.

“Why is Simon doing his story now?” several children ask. “He brought his animals to the stage,” I say. “They are walking over the hill.”

The next morning, “doing stories” is one of many choices during free-play time. The story list fills up and I have no time to watch for Simon. Zoey, the second storyteller, requires my concentration. Her speech is hard for me to decipher and the only character in her story I am certain of is a “ki-ee-ca” (kittycat), because it meows. Fortunately the children at the table are familiar with her pronunciations and translate for me. “Can I be the frog?” Toby asks when the story is done, but Simon squeezes in beside Zoey before she can respond.

“Walk walk walk,” he begins, placing the zoo tray on top of Zoey’s story. He leans against us as he walks the bear to the top of the hill. “The bear walks over the hill,” I say. Next come the elephant, lion, giraffe, and chimpanzee, and Simon and I act out his zoo story just as we did the day before. But this time he adds the wolf and he smiles.

In chorus the children at the table recite, “Walk walk walk. The wolf walks over the hill.” Zoey’s voice is the loudest.