Rhizomatic Learning: Maps as Lived Performance, not as Artifact

Perhaps one of the most important characteristics of the rhizome is that it always has multiple entryways...A map has multiple entryways, as oppose to the tracing, which always comes back 'to the same.' The map has to do with performance, whereas the tracing always involves an alleged 'competence'...What the tracing reproduces of the map or rhizome are only the impasses, blockages, incipient taproots, or points of structuration (Deleuze & Guatarri, A Thousand Plateaus pp. 12-13).

I've been thinking about the Common Core State Standards and the practice of using these standards, or the Common Core Curriculum Maps, or Heinemann's already made reading and writing Units of Study as 'the' maps curriculum writers in Districts trace in the development of local curricula that then gets handed to teachers to enact.  By their very nature, the made map, like a tracing of a map is an epic artifact, not a performance and learning requires performance. The epic world is sealed, untouchable and both learners and their teachers need to live in the middle of the work they compose.
That's the map as performance which is rhizomatic. 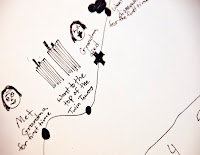 The made map that one then traces cannot carry with it the intentions, contexts, complexities, misunderstandings, and nuances that (in)formed the original. Meaning always exists at points of utterance. This is why curriculum is better situated as complicated conversation (Pinar, 2008). Mikhail Bakhtin (1984) would tell us that "Discourse lives as it were, beyond itself, in a living impulse toward the object; if we detach ourselves completely from this impulse all we have left is the naked corpse of the word" (Location 4116).  Curriculum taken from the Common Core, the Common Core Maps, or the prefab units of study will result in a mere tracing that "has organized, stabilized, neutralized the multiplicities according to the axes of significance and subjectification belonging to it" (Deleuze & Guatarri, p. 13).
The authors of the Common Core Curriculum Maps say:

Educators may view the curriculum maps as “road maps” for the school year, using them to jumpstart the lesson planning process. As common planning tools, these maps also can become the backbone of rich, content-based professional development as teachers collaborate to refine the curricula for their particular schools and classrooms.

Folks, there are no made roads worth traveling at the cost of your freedom.  The entryways and exits have all been preplanned and the attractions delineated. Alongside that made map is a calendar to keep you and your young charges from dreaming, dallying, racing, reversing, erring, collapsing space, making a detour.
No musing allowed/aloud.
And there you are motoring about and you get an itch to go left and you just can't do it. The road you are on is an accident.  So what's a body to do?
Live wide awake lives and let's call that "the content".  Dwell in the imagination and we might consider that akin to process. A little of each of these, along with consistent learner agency and we would find that would be enough.
The finest educators I know do this or try to do this as they labor under the mountain of predetermined 'content' and testing requirements.   I once taught middle school learners who decided early in the school year to remove most of the furniture from the room where we met and to organize the year as a collection of clubs they determined.  Although this was 1996,  one of the clubs a handful of students enacted was a gaming club and I was surely the student my students were teaching. We had a dance club, a reading long novels is great club, a solving community problems club, an editing club (my choice),  and a host of others that came and went as the year progressed. In the room which was carpeted, there was a very large table and a handful of chairs, a couple of easels, some computers and lots and lots of supplies (paints, pastels, brushes, software, cameras, books, magazines, newspapers, and so on).  In December of that year, about a dozen of us took to studying the moon for a month. We hand made art journals, collected and read related resources, interviewed a variety of people who had different expertise about the moon, and took to standing outside at night regardless of the weather for a full moon cycle.  Our journals were filled with our observations and became the texts we studied.  Beneath the club work, I threaded skills, strategies, and dispositions into the work we composed (as did the students) and I hoped it would keep them in good stead. I know that I still am studying the moon and the work 15 years ago continues to inform how I see.
"[T]he rhizome is not the object of reproduction" ( Deleuze & Guattari, p. 21). It is the made work that happens in the company of self and others.  At the time I was 'teaching' this middle school class, I was completing my doctorate at Teachers College/Columbia University.  There I was both teaching and participating in seminars where I was trying out ideas, discussing  and writing about what I understood to be happening with the middle school students.  It was in the middle of  all of this languaging with young teens, graduate students, doctoral advisor,  peers, and family that theories and practices merged, blurred, became a map made from the dialogic threads we composed. Again, Bakhtin (1984) is helpful.  He explains:

The living utterance, having taken meaning and shape at a particular historical moment in a socially specific environment, cannot fail to brush up against thousands of living dialogic threads, woven by socio-ideological consciousness around the given object of an utterance; it cannot fail to become an active participant in social dialogue (p. 276).

Each year is new. Not repeatable.
A premade curriculum, neither you nor your student have made, will get you lost.
Annie Dillard says it well in The Writing Life:

Process is nothing. Erase your path. The path is not the work. I hope your tracks have grown over; I hope birds ate the crumbs. I hope you will toss it all, and not look back.