Reimagining Learning as Lines of Flight

"Becoming-" is a process of change, flight, or movement within an assemblage. Rather than conceive of the pieces of an assemblage as an organic whole, within which the specific elements are held in place by the organization of a unity, the process of "becoming-" serves to account for relationships between the "discrete" elements of the assemblage. In "becoming-" one piece of the assemblage is drawn into the territory of another piece, changing its value as an element and bringing about a new unity. "  from Here.

4.
The rhizome is an antigenealogy. It is a short-term memory, or antimemory. The rhizome operates by variation, expansion, conquest, capture, offshoots. Unlike the graphic arts, drawing, or photography, unlike tracings, the rhizome pertains to a map that must be produced, constructed, a map that is always detachable, connectable, reversible, modifiable, and has multiple entryways and exits and its own lines of flight. It is tracings that must be put on the map, not the opposite (Deleuze & Guattari, 1988, p. 21).
5.
be you. 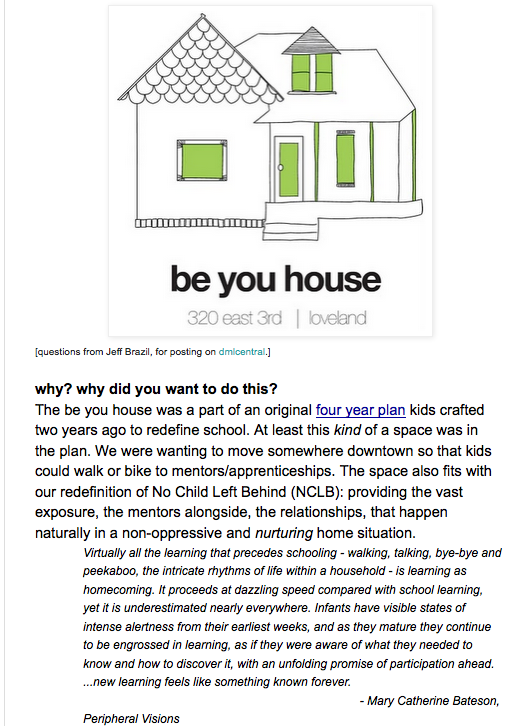 http://labconnections.blogspot.com/2011/10/be-you-house.html
6.
Nomadic Trajectories
"The only way to follow these fragmented, incomplete and often contradictory life stories was to follow their "lines of flight," away from pre-established destinies, be they of gender, "race" or class...What is particularly important for multiplicities is that they are defined by "lines of flight," through which they escape enclosed formations and connect to other multiplicities from the outside. There are indeed narrative "lines of flight" emerging from the young women’s narratives, most often leading to planes of inconsistency. Indeed the only way they can be read is not the triangle from where they speak, but from the outside, the planes, where they are attempting to fly...." Maria Tamboukou
7.
In a book, as in all things, there are lines of articulation or segmentarity, strata and territories; but also lines of flight, movements of deterritorialization and destratification. Comparative rates of flow on these lines produce phenomena of relative slowness and viscosity, or, on the contrary, of acceleration and rupture. All this, lines and measurable speeds, constitutes an assemblage (Deleuze & Guattari, 1988,pp. 3-4).
8.
From Josh:

“Lines of flight are everywhere. They constitute the available means of escape from the forces of repression and stratification. Even the most intense strata are riddled with lines of flight.” – Miguel Rojas-Sotelo

Lines of flight are creative and liberatory escapes from the standardization, oppression, and stratification of society. Lines of flight, big or small, are available to us at any time and can lead in any direction. They are instances of thinking and acting ‘outside of the box’, with a greater understanding of what the box is, how it works, and how we can break it open and perhaps transform it for the better.
Posted by Mary Ann Reilly at 10:37 PM