A Room of One's Own: Building a School with Kids

I grow tired of the education arguments. They seem so circular, pointless really.  It seems to be either all "Rah Rah Rah, public education is the best!" or "Look at all the students public schools are failing." Neither is particularly helpful, but perhaps that isn't the intention. I know we get a lot wrong in public education. I have seen it first hand as a teacher, administrator, and mom.  Saying so does not mean that I want pubic education dismantled. I just want it to be better (in)formed, more relevant and inspiring for all who participate, but especially for the kids.

I was driving a car full of kids today who asked me would I consider opening a "home schooling classroom" (their phrase, not mine). When I asked them why, they offered these reasons:
When I asked what they would miss about school they had two responses: friends (although they seemed to think all their friends would be enrolled in the home schooling classroom) and certain foods sold in the cafeteria.

I thought a lot about their responses and realized that it wouldn't take much to build the type of school (or home schooling classroom:) that would honor their rather meager requests.  Embedded in the different ideas expressed was the idea of choice. It seemed to be most paramount and I know that it is a necessity for learning deeply.  Choice matters and we should honor it in schools. I also thought about their desire to experience the world more directly. Is it really such a foreign concept to want to experience the world and remake it through various forms; to connect with others within and beyond our national borders; to be able to use the technologies they use everyday freely while learning?

I know some classrooms (in public schools) that approach these ideas, but no schools that fully embrace experiential learning and choice.  Nonetheless, it seems only a matter of will to make such a school with kids. 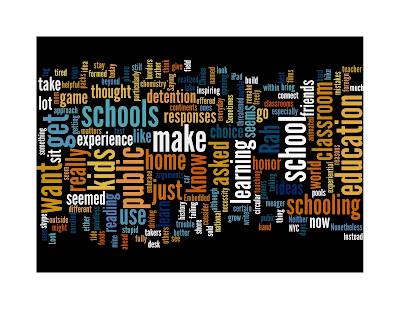 *Fog days is a family euphemism that means playing hookey from school in order to make photographs because it is such a great fog day to shoot.
Posted by Mary Ann Reilly at 6:48 PM