Books for My Presentation with Jane Gangi at 5th Annual Conference: Literacy Essentials

Tomorrow I will be co-presenting at the 5th Annual Conference: Literacy Essentials with friend and co-author, Jane M. Gangi at Central Connecticut State University in New Britain, CT.  Our topic is "The Wonderful World of Multicultural Children's and Young Adult Books." Jane and I will be engaging participants in selected multicultural literature through performance, discussion, examination of art conversation artifacts, and a "Check it Out" book pass. In preparation for the conference I am listing the books I will have on hand, so that participants will have a bibliography to refer to after the event.


A Poem about Tempo (and fluency too)

Tempo
By Charles Smith From Perfect Harmony: A Musical Journey with The Boys Choir of Harlem.
(Antiphonal 1: Read quickly)

(Antiphonal 1: Read with a moderate pace)

Keep the tempo at a moderate pace.
Let the music be your guide and don't chase.

(Antiphonal 2: Read with a moderate pace)

Not too fast or too slow,
just let the words go
with just the right pattern of temp.

A poem for Two Voices and a Chorus

The Last Word
by Nikki Grimes from A Dime a Dozen.

I peeled several potatoes
and tossed them in a pot.
Chop!
Said Grandma, "You should boil them first,
then peel them when they're hot."
Chop! Chop!
When they were done, I cubed them
into pieces one-inch thick.
Chop!
"No! No!" she said. "You slice them fine.
Like so. I know the trick."
Chop! Chop!
"The recipe is mine," I said.
(As if she cared a lick!)
Chop!
"Just do it my way: Do it right.
Here! Hand me the knife!
Chop! Chop!
"You'd better learn to cook well
if you want to be a wife."

Chop! Chop!
"I'll have you know, I've made
this salad many times before.
Chop!
"I'm grateful for your help
but I don't need it anymore."
Chop!
"No need to get all huffy,"
she said, "handing back the knife."
Chop! Chop!
I asked, "Oh by the way
who said I planned to be a wife?"
Chop!

Art Conversations
Samples of student work developed through art conversations.
The books that were used in concert with the poetry and artwork included:
Wilkes, Sybella. 1994. One Day We Had to Run! Refugee Children Tell Their Stories in Words and Paintings. Brookfield, CT: The Millbrook Press.
Williams, Mary. 2005. Brothers in Hope: The Story of the Lost Boys of Sudan. Illustrated by R. Gregory Christie. NY: Lee & Low. 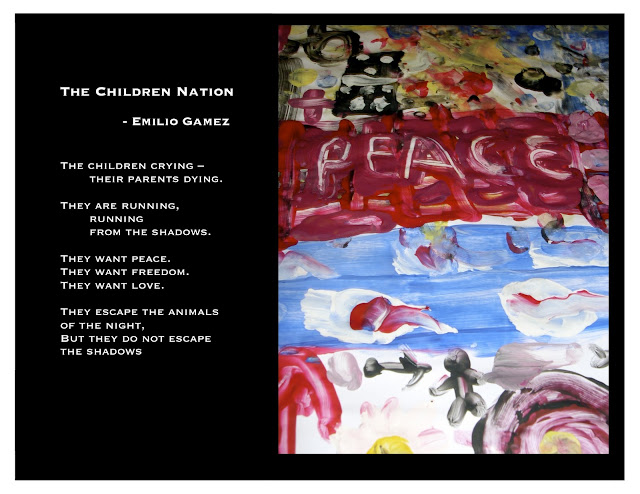 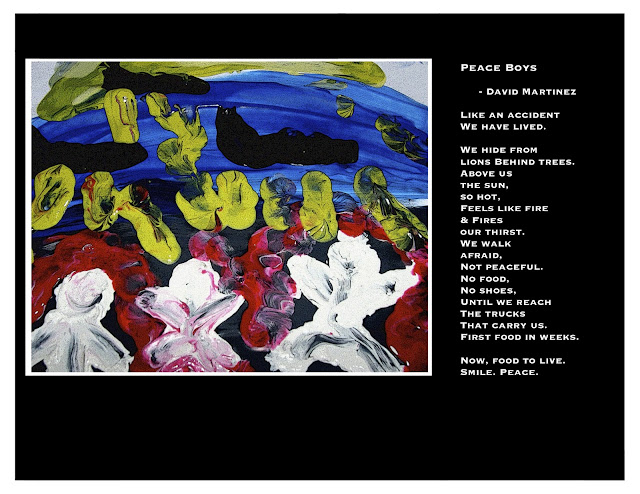 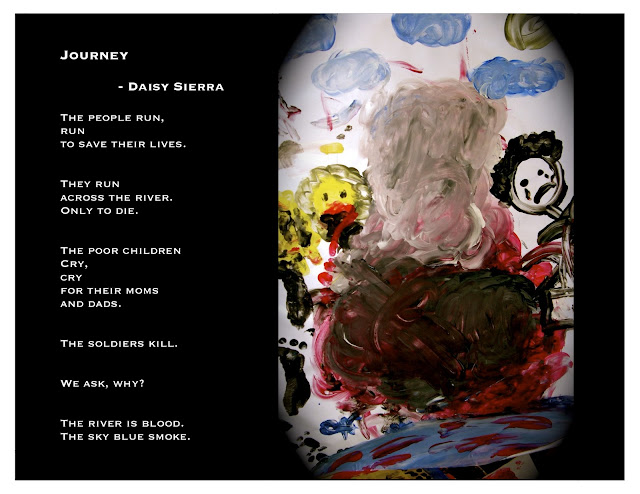 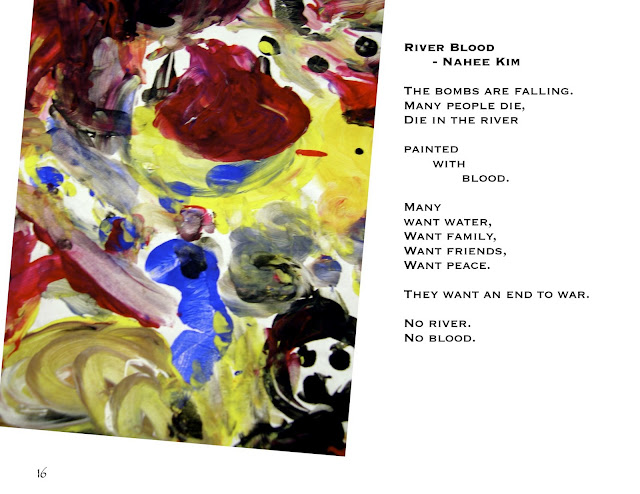