I have never received a hateful tweet, until this morning.  I don't inspire such rancor, largely because I am careful and realize that what I write here or tweet there is going to travel to places and people I have not met.  I don't seek to offend.

So you can imagine my surprise this morning when I read "Simply First Grade Fun's"(@beckyd256) tweet to me. DeVries decided that she would send this tweet:

Well that certainly caught my attention.
You might think I actually know DeVries as her tweet is so personal.
Well I don't.
We do not follow one another.
We have never met. 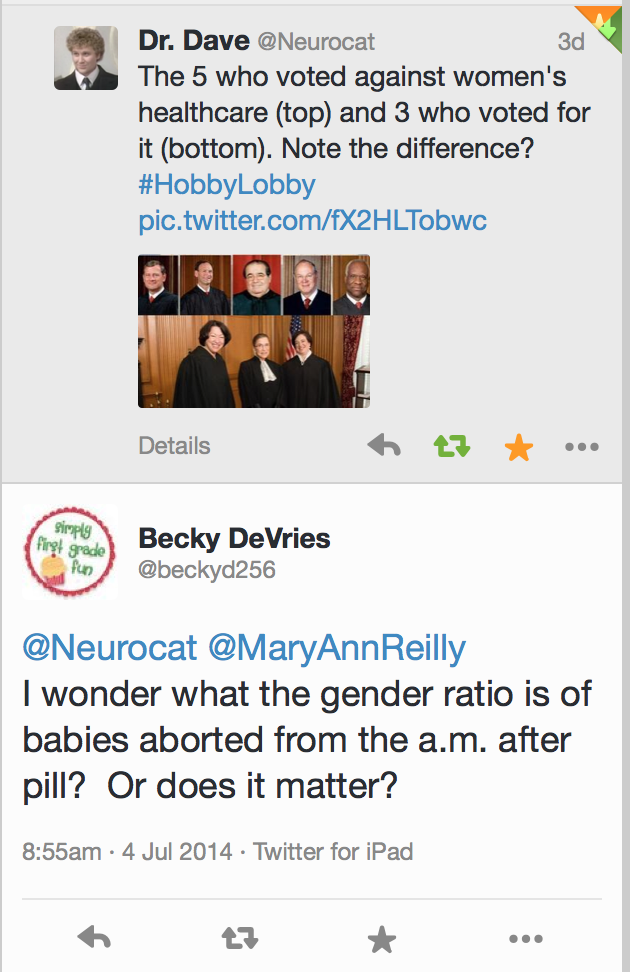 I retweeted @Nuerocrat's (Dr. Dave) tweet citing the gender difference in the recent Supreme Court decision about insurance for contraceptives--a difference that I also thought about via a recent collage I made for July 2, 2014.  Decisions made in the last week by the Supreme Court are a concern. Whenever personal freedoms are limited in a republic, I grow concerned and take notice.

But, it's a large leap in logic to interpret a tweet about the Supreme Court's gender difference as a stance about the morning after pill and then conflate that with abortion.

And although I would not apologize for the way I think about freedom, that does not mean that I have have no values as DeVries has concluded.  I abhor the limited logic that is espoused by some that if you do not oppose everything they conflate with abortion than you are without values for life.

Who exactly are they to judge?  How narrow.  How mistaken.

This is what I tweeted in response to DeVries:

It's well past time to call out people who behave in ways that are aggressively mean. I'm sure you've seen this: the driver who can't wait and needs to be first regardless of the realities of traffic and puts lives at risk with his/her aggressive behavior.  Or the newspaper columnist who thinks he has the right to conflate rape with privilege and pens hurtful trash in a syndicated column.  Or lawmakers who publicly joke about domestic violence. Beneath these different acts is this twisted belief that there is a given right to spew nasty and vile stuff at unknown others simply because an opinion or reality not liked has been expressed.  The inability to let others have their views is at best a sign of immaturity and can escalate to the kinds of drama we see playing out in the Middle East the last month  (here, here) where teens have been killed--and not by someone carrying a morning after pill and forcing others to swallow--but by thugs with intent to murder.

I'm not sure that DeVries understands that aggression often begets aggression and that being kind is the better fit.

It's the Golden Rule. The one we still teach in first grade.
I'd think someone sporting the logo: Simply First Grade Fun would know that.
Posted by Mary Ann Reilly at 12:06 PM