#AskObama What If We Have it All Wrong?

I tried writing a question to President Obama and realized that what I needed to ask required more context than 140 characters might offer.  I was wondering if President Obama has the will & the courage to not emphasize standards and testing that his administration has either established or continued from the Bush years? In other words (to borrow from Reagan [clearly a first for me]} -- Can our President JUST SAY NO to standards & testing?

The USDOE and state governments have an unshakable belief in the efficacy and wisdom of national and state standards that outline "the big ideas" and list objectives organized by discrete subjects for teachers to follow. We are told that standards represent the important information to be transferred and that tests designed by companies are the best way to know if the designated information has been learned.  It's all very neat--very logical. But what if the initial assumption is inaccurate?  What if the emphasis on information-based knowledge coupled with a manic desire to test public school students every few weeks in mathematics and English Language Arts (via the PARCC Plan,60 million children ages 8 to 17, would be tested nine times a year) reduces learning, children's desire to learn, and teachers' agency to teach?

In Doug Thomas and John Seely Brown's (2011) A New Culture of Learning they explain that this new culture consists of two elements:


The first is a massive information network that provides almost unlimited access and resources to learn about anything. The second is a bounded and structured environment that allows for unlimited agency to build and experiment with things within these boundaries (Location 63 of 2399).


Learning is treated as a series of steps to be mastered, as if students were being taught how to operate a machine or even, in some cases, as if the students themselves were machines being programmed to accomplish tasks. The ultimate endpoint of a mechanistic perspective is efficiency: the goal is to learn as much as you can, as fast as you can (Location 327 of 2399).

In the Obama plan for education, schools are places where students must demonstrate they have received the Common Core Standards and can replicate them on tests given frequently across each school year.  Failure to demonstrate that the standards have been received can lead to retention, failure, cheating, dismissal, and cash bonuses depending on your role and the outcome.  This schema is based on the belief that what we know remains stable.

In contrast in the new culture of learning it is understood that "Making knowledge stable in a changing world is an unwinnable game"(Thomas & Brown, Location 503 of 2399). Instead of valuing only explicit knowledge, we must value tacit knowledge ("We know more than we can tell" (Polanyi as quoted in Thomas & Brown, 957 of 2399).

Like many others, Thomas & Brown conclude that "Students learn best when they are able to follow their passions and operate within the constraints of a bounded environment"(1038 of 2399).  It is challenging, if not impossible, to follow one's passions when federal and state standards outline what matters and in doing so exclude opportunities for the complicated process of a young person coming to know his/her passion(s) to happen.  The very absence of choice is problematic.

Applying the New Culture of Learning: Posing Questions About Things That Matter


As I have indicated in former posts, I have been interested in watching my 12 year old learn.  He is deeply involved in Minecraft and recently learned how to turn the family computer into a Minecraft server.  When I asked him how he had learned this he said that he watched a "ton of YouTube videos" and taught himself about the computer's operating system.

He told me: "It was a lot of trial and error. A lot of experimenting."

I also wondered what motivated him to create his own server. Why did he do it?

He said he wanted a place where he and his friends and people he hasn't yet met but who also like to play Minecraft could play together and chat. The multi-player aspect of gaming matters to him and motivates him to learn and want to play.  When he first began playing Minecraft he played it as a single player.  He did this for about two months and then decided that he wanted the interaction with others in the world he was designing and building. I'm encouraged that he sees people he has yet to meet as potential friends.  We have discussed safety precautions as well as the more probable scenario that he will meet people who share his interests and who help him to widen and deepen those interests through play and chat. (See Will Richardson's 8 Shifts for Every Classroom: Shift 1: Do Talk to Strangers). 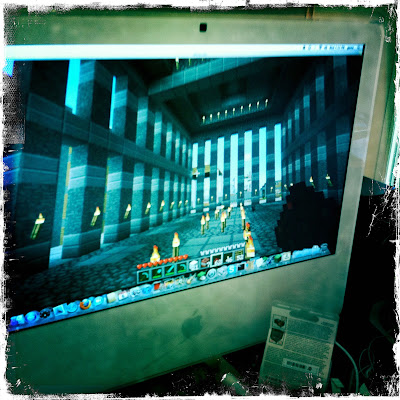 In the world he and others are building, my son made a replica of the Parthenon.  When I asked him how he built it he explained that he had downloaded different images of the Parthenon taken from different angles and then used the images to think about the exterior and interior of the structure as he built his replica. When he had a question, he did an image search.  He also said that he was disappointed as he could not figure out how to build a replica of the statue of Athena.

My son's interest in the Parthenon was tweaked when I told him that two high school students where I work had created a replica of the Palace of Fishbourne in Minecraft.  He figured out how to contact them via their server and was soon interacting with them.  He wanted to do what they had done: build a server and infuse a sense of history into the play.

Again Thomas and Brown discuss the importance and centrality of play, referencing Johan Huizinga (Homo Ludens): "...play is not merely central to the human experience, it is part o f all that is meaningful in human culture. Culture...does not create play; play creates culture" (Location 1359 of 2399). 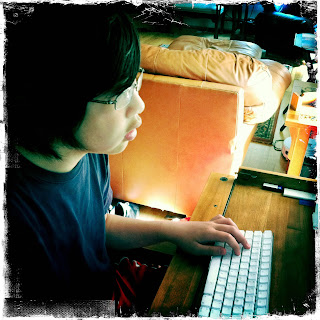 Central to my son's play in Minecraft, as well as his friends who are often at our home playing or on line playing-- is the sense of agency they possess.  What I find interesting is none of the boys would be considered honor roll students. Some self describe themselves as having reading problems and disliking reading.  Some describe themselves as being "bad in math."  Many have comments on report cards that say: Easily distracted. Not working to potential.  Some have been classified hyperactive. Yet all can design and build intricate worlds with harbors full of ships and various types of homes with rooms serving different purposes, and farms, and self-repairing bridges, and portals to name but a few things. They can do this for hours.

Thomas & Brown discussing agency explain that "unlike traditional notions of learning which position the learner as a passive agent of reception, the aporia/epiphany structure of play makes the player's agency central to the learning process, How one arrives at the epiphany is always a matter of the tacit. The ability to organize, connect, and make sense of things is a skill characteristic of a deep engagement with the tacit and the process of indwelling" (Location 1381 of 2399).

My son built a server as he is in search of a guild: a group of dedicated players who actively participate in the making of the game, framing and posing questions, using answers to generate more questions, and attending to design challenges and other problems as they arise.

The learning world we need to engender looks little like the structure of school we know today. It is not informed by a list of standards, regardless of how clever those standards may or may not seem to be. Learning is not satisfied by having patients receive knowledge and replicate that information on national tests.  Such passivity dulls interest.

Instead, a shift needs to happen. Instead of schools being the locus of learning, we need to be open to seeing learning opportunities beyond the classroom and valuing such experiences instead of situating them as marginal.  This means that we need to be learners as well.  There are educators I have worked with or met via social networking that I would love to have looking in as my son and his friends play.  I imagine teachers like Harry Sugar or David Wees whose keen knowledge of mathematics might shape (bound) occasions based on the game playing that might help the boys to name the mathematics they are using as well as the naive understandings they may well have.

When I think about learning that is needed, I imagine a guild as well: a collection of people who are committed to learning and connected through interests and mediated online and in person. I like the idea of a bounded environment where experimentation happens and agency is privileged. I appreciate the understanding that knowledge is changing at a rate that defies us naming it, teaching it, and regurgitating it on tests. I imagine experiential learning and tacit knowledge coupled with some explicit knowledge mattering. Instead of sitting and watching, learners (students, teachers, mentors, community based experts) would be knowing, making, and playing.

How and what should be locally determined and informed by learners' interests.

Curious as to what you think & I will continue this...
Posted by Mary Ann Reilly at 12:24 AM