When I read Nick Kristof's Unfit for Democracy, in the Sunday NY Times -- it really resonated. In the column (and I urge you to click on the link and read it), Kristof outlines not only why the Middle East is "mature enough" for democracy (their extraordinary courage), but also makes quite clear that by asking the very question, we show our ignorance and prejudice.  He writes: "I'm awed by the courage I see, and it's condescending and foolish to suggest that people dying for democracy aren't ready for it."

Yet, the question (and I am going to suggest only a question an empire could ask) is not whether or not people who are willing to die will be able to develop and manage democracy, but whether those of us who come by our democracy not through any self-sacrifice or conviction, are cognizant of the responsibilities that accompany democratic states?

Kristof's description of the people he has met (double amputee who rolled his wheel chair to the front line of the Cairo demonstrations or the former political prisoners in Bahrain who were told they must confess or their wives would "promptly be raped") show that their courage is a formidable force. It also made me wonder about my life here in the States and if any of my neighbors or me would sacrifice as greatly as the people in the Middle East are doing.

Am I willing to die for democracy? Am I willing to not simply complain to my spouse or neighbors about undemocratic practices, laws, and policies in the country where I live, but am I willing to take action? Is the limit of my action signing a Move On petition? Am I so removed from questioning the absence and presence of democracy I and others experience, that my level of conviction is difficult to know? What policies does my government act on that cause me shame?  What actions have Presidents taken that jeopardize, limit, or corrupt our or others' democratic process? What laws have the Supreme Court upheld, that I know are unjust?  What actions have Congressional representatives embraced and acted upon, that I know to be cruel and unjust to some? With what voice do I speak and to whom? What civic responsibilities do I accept and act on?

Someone recently told me that we (in the United States) have confused having 20 different types of detergent in an aisle in the local Stop & Shop with democracy.  A few years ago I posted a brief essay that examined democracy and consumerism.  I repost it here: 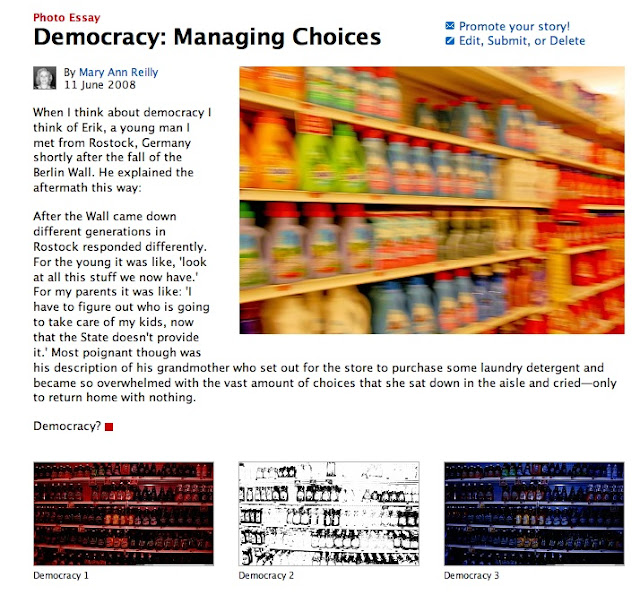 
In the United States, the majority undertakes to supply a multitude of ready-made opinions for the use of individuals, who are thus relieved from the necessity of forming opinions of their own.

Wondering what you think about this? Is democracy and its roles and responsibilities palpable forces in your life, in your community, in your country?