On Saturday I went shooting (cameras, of course) with a woman, Kathleen, who had emailed me earlier in the week and asked if we might shoot together.  She had indicated that she had followed work I had posted on my art site and thought we might go out and photograph.  She realized we both live in New Jersey.  We would find out that not only did we live in neighboring towns, but we each worked in Morristown, NJ.  We decided to meet at Monksville Reservoir in Ringwood at 6:30 a.m.   It was still twilight when we arrived, the waning moon the main source of light. Gradually the sun's light edged over the mountain, lighting the trees.  No matter how often I visit Monksville Reservoir, the line of light on the water never fails to amaze me. There we made some images as the sun lit the barren trees at the western end of the reservoir.
The water that feeds the reservoir comes from Greenwood Lake and flows through the Long Pond Ironworks State Park, located in West Milford, NJ.  Kathleen made mentioned of a waterfall that cascades into an abandoned mine shaft and we set out to find it.  She learned of the waterfalls from some teenagers she had met at a local pool that summer.  They raved about diving from the top of the rocks into the mine shaft.

I have visited Long Pond many times in the last few years and have made many images, however I had not visited the falls before.  As we trekked through woods trying to follow paths we kept finding ones that dead-ended at rocks. Eventually we began to hear water and followed the sound. The woods here are lovely, still green with summer and early morning light. The narrow paths are reddened by the decay of pine needles.  We walked alongside the stream that feeds the Monksville Reservoir and then climbed higher to the rocks that frame the falls. 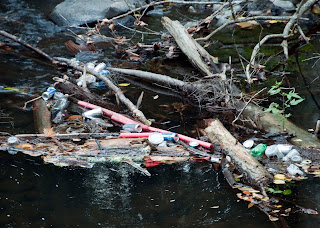 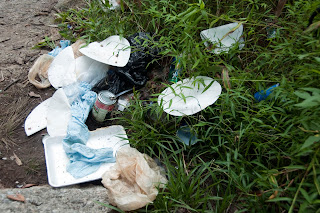 As we got closer to the falls, the presence of others became more and more evident.  At first, it was the occasional wrapper or broken glass.  By the time we made it to the hill and rocks that frame the top of the falls, human "traces" abounded. Underwear, socks, t-shirts, beer bottles, beer cans, Gatorade bottles, paper plates, plastic bags, were littered across the ground and in the water. Trees had been chopped and cans that might have been heated in a campfire left discarded on the ground.  Broken glass crunched underfoot. Two garbage bags had been left and were partially filled.

Neither Kathleen nor I could speak. Somehow, shooting the falls seemed misplaced given the severity of the littering and utter disregard for nature.  I stood there for awhile just taking it in and then began to document, thinking about the Leave No Trace Center.

Leave  No Trace is a nonprofit organization dedicated to ensuring that humans do not destroy the earth.  The Center accepts nominations of "hot spots" that need to reclaimed.

According to the website, The Center intends to do the following:

I nominated the Long Pond State Park as a hot spot on 9.6.10.  I'll let you know what I hear.  In the mean time, anyone want to volunteer to go clean up some woods and streams?