Imagining A to Z: K is for Knitting Together Ideas that Inpsire

K is for Knitting Together Ideas that Inspire

One morning in the space of four minutes, two friends tweeted the following: 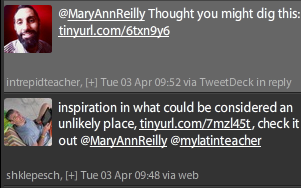 Releasing the imagination is often a matter of following a tweet and seeing where it leads.  In both cases, the tweet ended in inspiration--in helping me to see what I had not considered.  Jabiz, located in Jakarta and Scott, located in New Jersey each pointed via a link to a way of seeing that underscored how the imagination is fueled by approximation, risk, and uncertainty.
Here's Jabiz's post (Power of Whim) about music, drawing, and poetry with seventh graders.
Here's Scott's link to an innovative high school in New York City that is finding its sea legs so to speak.
The juxtaposition of the two opened for me a space that helped me to consider the importance of experimentation on varying scales.
Be open to what you can't imagine by knitting together ideas that just happen to arrive alongside each other.

Note: In this series of post during the month of April, I am participating in the A to Z blogging challenge, with each day focusing on a letter.  In order to bring some cohesion to this process--releasing the imagination is the focus of each post.