Alejandro, a fourth grader, is struggling as a reader and writer to express ideas. On the day I met him, he had completed writing a personal narrative and was trying to use the comments from his teacher to revise/edit the text. The problem though was that Alejandro's reworked narrative remained very difficult to understand given the significant syntax issues (incorrect word order, fragments, missing words, incomplete sentences). My work at Alejandro's school for the next year is to support intermediate and middle school English Language Arts teachers by collaborating with them during a weekly 2-hour  PLC and modeling, coaching, and co-teaching during class time. As such, I asked Alejandro's teacher if she wanted me to confer with a few students while she observed.  (I previously posted about one editing conference here). She selected the students I would work with and observed the conferring sessions.

I often begin conferring seated alongside a child and ask him/her to read the text or section of the text aloud. I most often ask the writer to make sure she or he has a pencil/pen at hand.  As Alejandro began reading, he too had difficulty discerning what he had written. In order to curtail his frustration, I asked him if he would get a blank flip book that his teacher had made for another activity the children would be doing later that day.  Alejandro brought me the blank flip book and I explained that sometimes when we draw it helps us to recall experiences and organize them.  I opened to the first two-page spread, and indicated that Alejandro would make a drawing of what happened at the beginning of his story about his bike mishap.  Beneath the drawing, I explained that he would then write what happened. We continued through the flip book and I marked the place where he would draw the middle and the end of the story and where he would write. I suggested that he not copy from the written text he had already produced. Alejandro was excited about the task and immediately returned to his desk and began working by himself. 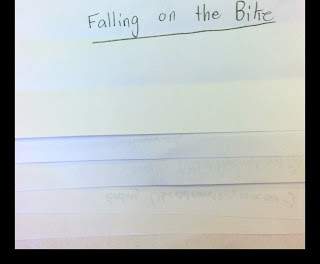 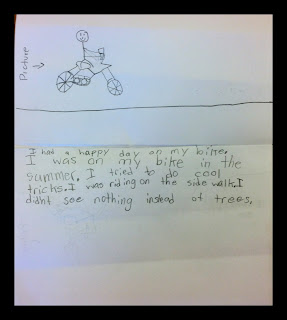 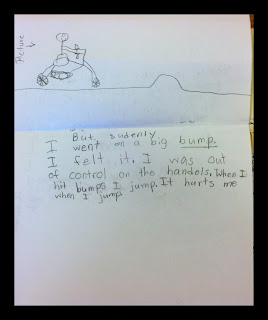 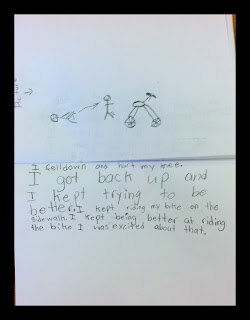 About 20 minutes later, Alejandro returned to where his teacher and I were working (with other children) to share his completed work.  I found it interesting that he initiated sharing his work.  This time when I conferred with him, I began by asking him to tell me about the first picture he had drawn.  As he talked, he added the straight line beneath the image of him on the bike, indicating that he had been on a sidewalk.  I asked him what he might have drawn behind him and he quickly described that his story happened during the summer and that he had been at an uncle's home in the same city where he lives.  "They have just three houses on the whole block," he told me. We next looked at what he had written and what was interesting was that most of the syntax errors that had been so severe in the first draft were largely missing in the flip book. This is a phenomenon I have seen before.  As writers gain control over what they want to say (in this case by first drawing) their syntactical control increases as well.  As we worked together, Alejandro was able to talk about his drawings, imagine scenes he had not drawn, read his story aloud, and add details to the written text and he worked.  As he did all of this his confidence increased.  In the final written version of the story Alejandro wrote a brief narrative about a time during the summer when he had lost control of his bike, fell, and got back on his bike. Teh text made sense and was readable.

Today I conducted a two-hour professional learning session with Alejandro's teacher and her third grade colleagues. I introduced the teachers to schema theory and made use of the conferring session with Alejandro to illustrate three modes of learning: accretion, tuning, and restructuring. When new information is remembered in the context of an existing schema, without altering that schema, accretion occurs. Alejandro's teacher had written comments on his draft in the attempt to guide his revision and editing.  Her comments were cogent and meaningful and she anticipated that Alejandro would be able to make use of the comments to guide the revision. A challenge for Alejandro though was that he did not seem able to integrate the comments into his existing schema about personal narratives. Further, the situation did not simply call for Alejandro to modify his existing schema (tuning).  Rather, Alejandro needed to restructure the concept of personal narrative which he seemed to know as an act he routinely failed at doing.  He seemed unable to sufficiently call forth, create, and organize important details and images of his story through written text alone.  He seemed to have difficulty seeing scenes using only written language, nor did the written comments by his teacher sufficiently guide him to better see.

David Rumelhart and Don Norman (1976) write when "existing memory structures are not adequate to account for new knowledge restructuring occurs" (p.14). By drawing first, Alejandro was able to use another symbol system to help him write about the bike accident. When students use multiple symbols systems (in this case visual and written) as potential ways of learning, they engage in transmediation.  Less clear is whether this experience might help Alejandro begin to restructure his understanding of the personal narrative.

In the article, Saying What You See in the Dark Engaging Children in Art, I wrote (2009):


Teaching that makes use of transmediation (Cowan & Albers, 2006; Eisner,
1994, 1997, 2002; Leland & Harste, 1994; Siegel, 1995, 2006; Suhor, 1992; Tierney, 2005) potentially produces more flexible thinkers, an important cognitive prowess. Eisner
(1997) contends that “different forms of representation develop different cognitive
skills” (p. 349). The work described here produced the potential for learners to not
simply transfer their understanding as they engaged across sign systems, but rather
to develop new understandings. Eisner states that “the choice of a form of representation
and the selection of materials to be used both constrain and offer possibilities
we use to represent what we think influences both the processes and products of
thinking” (p. 349). I suggest that by thinking about the given topic through multiple
representations, the end products were enhanced (p. 78).


The important work in the conference was not only about helping Alejandro write a better narrative, but more so I wanted Alejandro to develop some new understandings about how to compose a narrative and the importance of seeing/imagining scenes while writing.  This latter outcome is bigger than a single text and will serve Alejandro well as he continues to develop as a writer.