#SOL20 - The Obscene: Notes from the Pandemic

Tonight, I caught up on news.  Panic seemed to rule, as did the obscene. Texas Lt. Gov. Dan Patrick told FOX News TV watchers that he preferred death over life if that meant getting people "back to work." Patrick told commentator Tucker Carlson,

“So my message is that let’s get back to work. Let’s get back to living. Let’s be smart about it. And those of us who are 70 plus, we’ll take care of ourselves, but don’t sacrifice the country. Don’t do that. Don’t ruin this great America.”

Patrick equates getting back to work, which in this case would likely create thousands and thousands of deaths, with getting back to living. He makes a dangerous proposition, one no one in service to the people ought to ever make, sound like a patriotic gesture that a John Wayne character might make in a film.

But this is not a film. Like it or not, this is a pandemic and we cannot control it by bluffing or bellowing like an idiot full of sound and fury. Patrick should step down. He is reckless, unAmerican, and his advice will get us killed.

Patrick's suggestion that America go back to work and ignore the Center for Disease Control's advice that the "best way to prevent illness is to avoid being exposed to this virus" reinforces the President's rambling nonsense about the cure being worse than the virus.  Trump announced in a two-hour blab-fest that he would re-open America for business in “weeks,” not months. 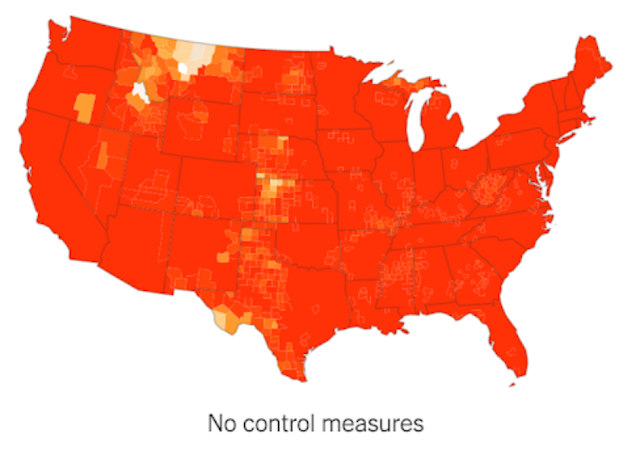 See all that blood-red? That reflects the percentage of people who would likely be infected by COVID-19 by July 1, 2020 if we did as the President and the Lt. Gov. tell us we should do: Stop staying home and go back to work. Without control measures, the outbreak might sweep across most of the country by early May. By mid-May, it is estimated that new cases of the virus would reach 500,000 per day.

The America that Patrick claimed to love would be no more. The economy would not have recovered and would now be in even worse shape as the country would be faced with out of control health needs and too few options to actually treat the sick.

More people would die because the President and his crony thought tough talk would effect a virus.

Patrick's question,  ‘Are you willing to take a chance on your survival in exchange for keeping the America that all America loves for your children and grandchildren?’ is faulty. There is no individual in this scenario. His actions to return to work will affect scores and scores of others who will affect more and more people until the map of the United States is blood-red and our faulty decisions bleed that red across Canada and Mexico and from there it just travels on and on.

That is the nature of a pandemic. It doesn't respect borders or border walls. It behaves as viruses behave looking for opportunistic ways to proliferate.

The advice from Patrick and the edict from Trump represent the forward way for a pandemic to claim a globe.