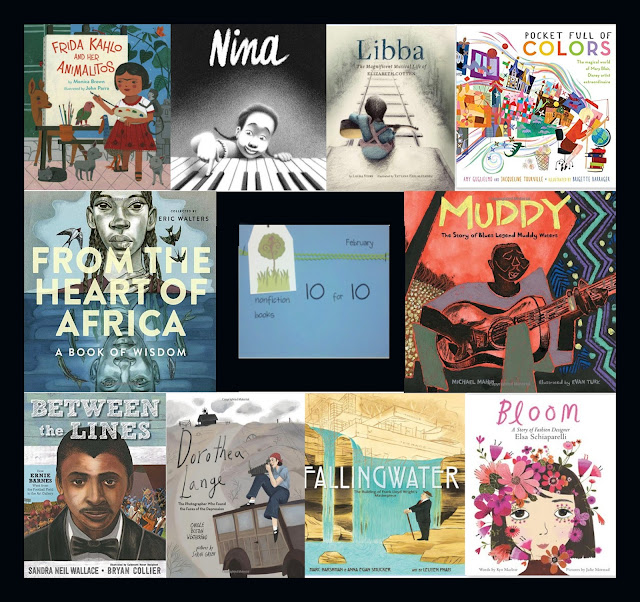 This picture book biography of Mexican painter Frida Kahlo portrays her childhood and adulthood with a twist: the text focuses on how she was like her pets. For example we learn that Frida was colorful like her parrot and independent like her cat. In the style of the artist Frida Kahlo, illustrator John Parra uses acrylics to capture the folk art sensibilities of Kahlo. His work is gorgeous and earned the New York Times Best Illustrated Children's Books of 2017. Well deserving. 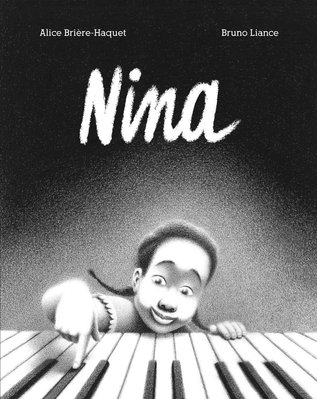 It wasn't until I was well into my 30s that I first heard Nina Simone sing. Rob had a CD (yes it was that long ago) of hers and we listened to it on a trip north to Maine. I was hooked. Her voice carries such tension, such blues. Hers is an aching beauty that comes together especially well in songs like, "Tell Me More and More and Then Some." I could listen to that over and over again.

This picture book biography told by Nina as a story she is telling her daughter illustrates  the woman as musician, the mother, and the activist. Told through Bruno Liance's black and white illustrations that offer a stark simplicity. This is a jewel of a book.

This picture book is based on the life of Disney illustrator Mary Blair. Blair is most well known for her design of the the 1964 World's Fair ride--It's a Small World--a ride I have been told I rode as a very small child. Truthfully, I can't recall. Years later I would see that ride again in Florida. What I like most about this book is how the text focuses on Blair's use of color.  The text opens: 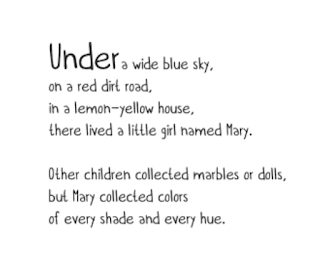 and then goes on to explain that when Mary's family moved to California, the sights she saw along the way --hues of various colors--would influence her work as an artist.  Lovely. 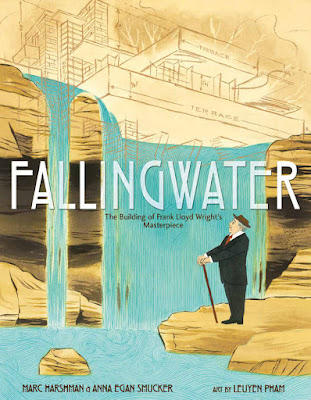 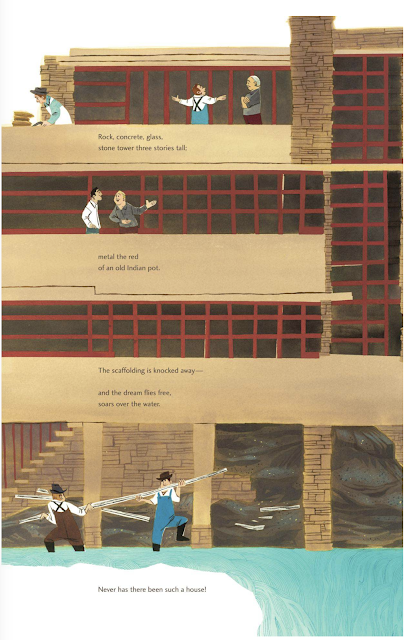 The story about how Fallingwater was designed and built opens with a quote from Wright's autobiography:

"No house should ever be on a hill or on anything. It should be of the hill. Belonging to it. Hill and house should live together each the happier for the other."

Harshman, Smucker, and Pham then go on to illustrate in beautiful written and painted language how Fallingwater embodies that quote.

Without question one of my favorite of the ten. 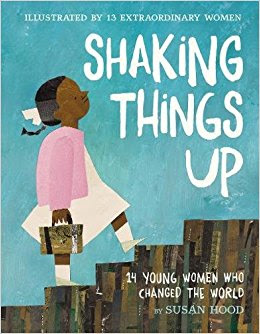 This is a keeper book and an extra bonus book here as I am not telling you about the whole book, but rather just one of the 14 young women featured. The text is written in free verse and each illustration is done by a different artist.  All 14 women are exceptional. For this post though, I am only focusing on Maya Lin, "A New Vision." Lin is the architect-artist who won the competition (entry #1026) to build the Vietnam Memorial. The first time I visited the memorial it was with several hundred 12th graders who had met all of their senior high school obligations and were on their way to Virginia Beach for a bit of holiday. It was the dredded (if you were a chaperone and I was) senior trip. But what happened that day stays with me--30 years later. The kids were loud as you might expect, but as we came over the hill, the black wings of the monument rose up out of the ground and the students grew quiet, silent, absorbed. 200 voices, hushed. It wouldn't be until 20 years later that Rob, Devon and I went by boat to the war memorial at Pearl Harbor that the same sense of silence would descend.

At the end of "A New Vision," Susan Hood asks this provocative question:

what should a war memorial do?

and then lead us back up


It's a question and a response that stops me and makes me think.

Julie Morstad (loved, loved her book, The Wayside) illustrated the Maya Lin pages.
At the conclusion of the book are biographical notes and links to more information about each of the women. Below is the book, Bloom, that Morstad illustrated as well. 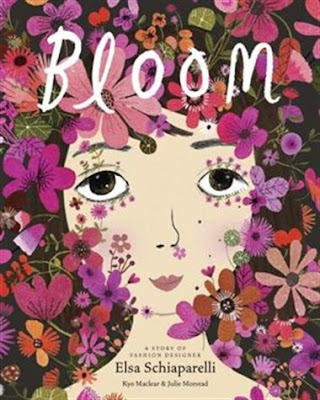 A picture book biography about Elsa Schiaparelli, an Italian fashion designer who was influenced by surrealism. Told from first person point of view, we learn about her childhood (she thought herself ugly and questioned what was beauty) and her art that took form as she designed clothing and bags, and shoes in bold, bold colors.  Julie Morstad captures the spirit and dazzle through mixed media.

There's more than enough energy in the telling of this history and the images that launch a reader off of the page. This picture book biography of legendary blues guitarist, Muddy Waters, is spectacular. Evan Turk's paintings and collages electrify while the dialogue by Mahin is simply spot on.  Consider this exchange between Muddy and his grandmother: 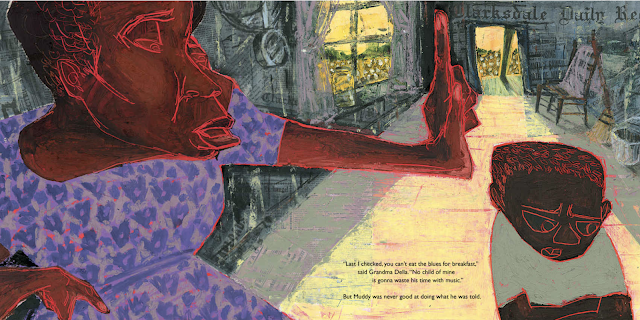 This story though is not only about the musician, but also about the way he stood up when the indignity of being an African American sharecropper the Delta grew too great.


The boss man's face went red with anger as Muddy walked away."Stop right there or you'll never work in this town again!"But Muddy was never good at doing what he was told.

And so Muddy left the Delta and headed up to Chicago with his guitar and his blues. 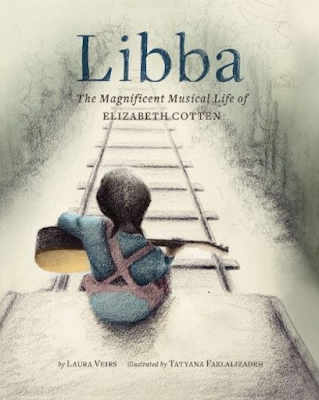 This picture book biography is about folk singer and guitarist, Elizabeth Cotten who is most well know for a song she composed at the age of 11, "Freight Train." Veirs captures the perseverance Elizabeth Cotten showed and how it was Cotton's housekeeping work for the Seegers that helped to place her on a stage for all to come to know. And as lovely and powerful as the words are to this story, the images made me want to weep. 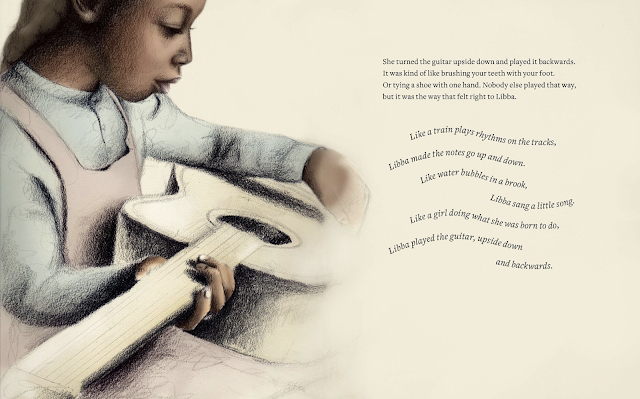 First time illustrator Tatyana Fazlalizadeh's graphite illustrations are moving and evocative. She made me want to look and relook every single page. Stunning and evocative work. Here is a link to her website. You will want to check out her work.  One example of her art:

This is Elizabeth Cotten performing.  I love this video as it helps me to get a sense of the woman and her music. She was quite the storyteller.

Wallace, Sandra Neil.  (2018). Between the Lines: How Ernie Barnes Went from the Football Field to the Art Gallery. Illustrated by Bryan Collier. New York: Simon & Schuster.
This picture book biography explains about the life of African American NFL player Ernie Barnes (1938-2009) who became an American painter during the 20th century. This picture book focuses on Ernie's love for painting and what he needed to do in order to become a painter having grown up in the Jim Crow era. One section of the text that really moved me was the exchange Ernie had with an art tour guide when he first visited an art museum in North Carolina. He asked where the paintings by Black artists were and was told, "Your people don't express themselves in that way." Although this biography tells the story of a man destined to paint, it situates that story within the story of the civil rights movement.

Bryan Collier who included an artist's note in which he explained meeting Ernie Barnes in 2000 at an art festival created the images for the book using watercolor and collage-his signature art style.  This book is evocative, informative, and moving.


This picture book features aphorisms from Africa that have been collected and then illustrated by Eric Waters. In the introduction Walters explains that the aphorisms were ones he heard from friends. I appreciated that where each aphorism came from was listed along with an interpretation.

The images were created by more than a dozen artists who created the illustrations using traditional and digital media.

A portion of the royalties will be given to aid Kenyan orphans through Creation of Hope. Further Penguin Random House Canada will match the donation. Hope you will buy a copy. 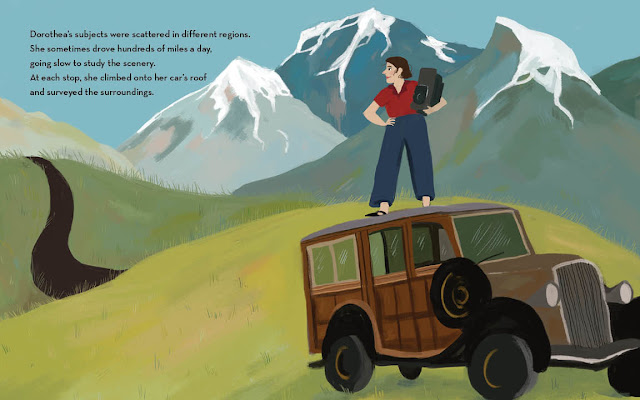 
Carole Boston Weatherford's writing always draws me in and this picture book biography of one of my favorite photographers is no exception. Weatherford allows us a more personal glimpse of the iconic photographer beginning with the nickname Lange was called by peers after she had polio.  They called her Limpy.  It was this sense of other that Weatherford says Lange embodied that allowed her to empathize so greatly with those she would capture on film. The inclusion of original photographs makes this a keeper.