What do we make of these questions that Christopher, a 2nd grader wrote while listening to his teacher, Suzanne Capuano read aloud chapter 8 of Cynthia Rylant's Gooseberry Park? 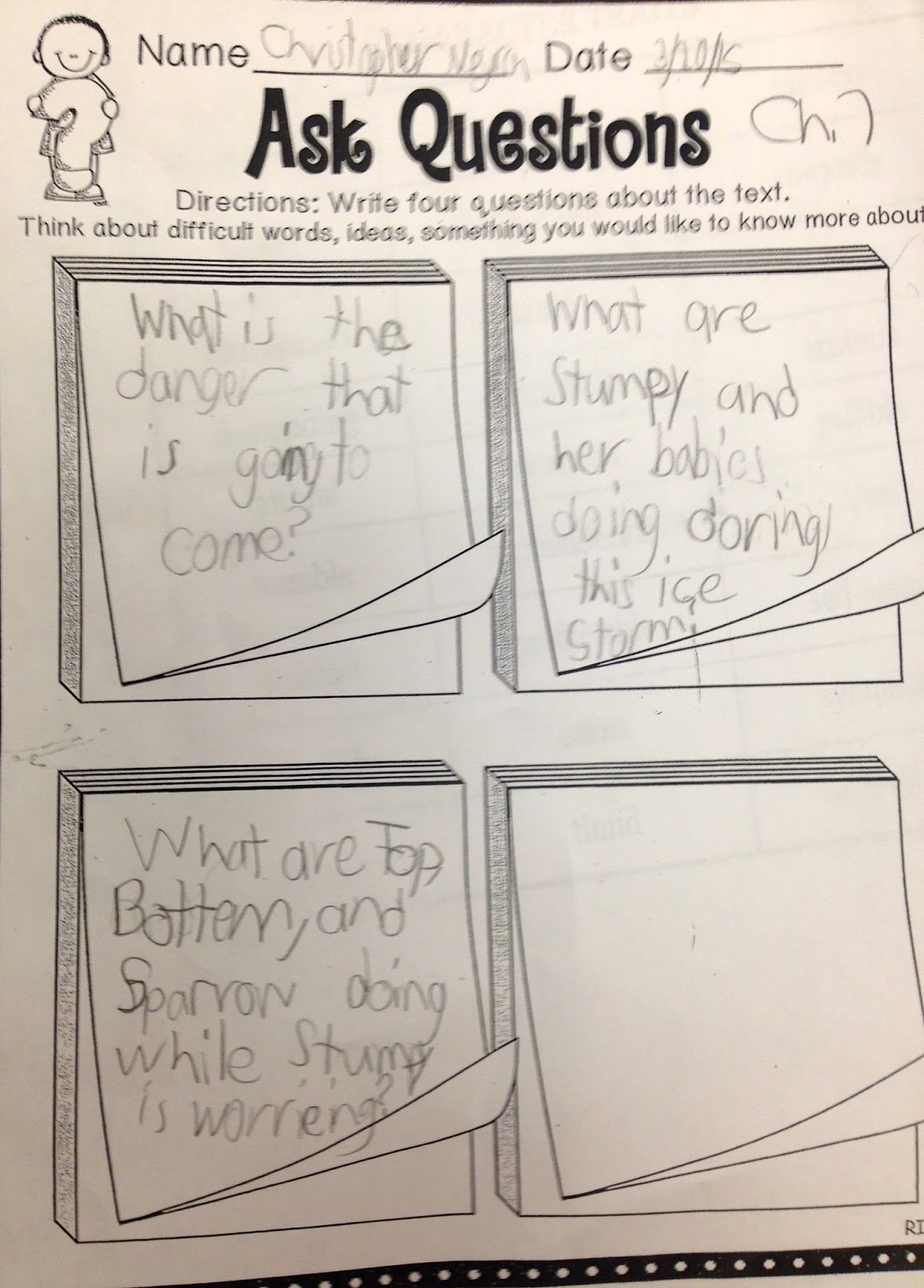 In the second grade where Christopher is a student, he and his classmates are engaged in a novel study that Suzanne (posts about Suzanne: here, here, here) has created. After the novel was anchored and students cared about the text, they began to write questions during the read aloud that they were wondering.

As I read Christopher's questions I thought about Nel Nodding's notions of caring and noticed that he wonders often about the welfare of major and minor characters. Noddings would tell us that an ethics of caring is an essential foundation that (in)forms ethical decision-making. I'd certainly agree.

In writing about care theory, Noddings notes that caring-about can be connected to cared-for.

The key, central to care theory, is this: caring-about (or, perhaps a sense of justice) must be seen as instrumental in establishing the conditions under which caring-for can flourish. Although the preferred form of caring is cared-for, caring-about can help in establishing, maintaining, and enhancing it. Those who care about others in the justice sense must keep in mind that the objective is to ensure that caring actually occurs. Caring-about is empty if it does not culminate in caring relations. (Noddings 2002: 23-4)


Christopher's questions reinforce the belief that the study of literature can provide opportunities for children to try on caring roles that begin with noticing other and lead to making ethical decisions based on the text. What is Kona willing to sacrifice to save his friend?  At the age of 8, these book-informed decisions are life-like. For example, there's an immediacy to Christopher's questions that suggest he is right there alongside Stumpy, Top, Bottom, and Sparrow.  Christopher's use of the definite article, this, in question 2 suggests an intimacy with the story's action. It's not an or even the ice storm, but rather this ice storm. He's right there.

The range of questions the children posed during the half-hour was extraordinary and could make for an interesting study about how young children think across a novel. As I listened and read, I wondered what patterns might emerge with regard to the children's question posing, such as Christopher's concern for the welfare of the characters.  Here's just a few of the questions children posed (orally and in writing) while I was there:

As I think about the importance of literature in Suzanne's class, I think of Alice Walker's critical question: If art doesn't make us better, then what on earth is it for?  I realize that becoming better human beings isn't something Pearson can aptly test (and we may be the better for that) and doesn't show up as an explicit standard, but surely we don't need others to tell us that learning how to make ethical decisions in the safety of the classroom is apt and important learning. I'd be so bold as to say it could well be the most critical learning we can occasion. Years ago I was listening to Noddings lecture.  It was May of 2004, two weeks after 60 Minutes reported about Abu Grahib and Seymour Hersch's article about the abuses and torture at the prison was published in The New Yorker.  That day at Columbia University, Noddings raised the question about how outcomes might have been different if students learning how to make ethical decisions throughout their school lives was privileged. Might some of the soldiers have thought or acted differently?

Today while in Suzanne's class I was thinking about caring and the power that often accompanies such commitments. I noticed several things that could get lost given our rather singular focus on the CCSS & the various tests that accompany it.  These included:


I hope next fall when Pearson or PARCC or the State of NJ releases test scores that we will pause and remember this slice of learning and others like it. The most important things we do in the company of children are rarely measured by our high stakes tests.