Disassemble, Reassemble: Some Notes About Curriculum and Improvisation

I was listening to music on my morning commute (2.5 hours. Yes, Northern NJ can be a nightmare).

Anyway I had my iPod set to random and David Bromberg's "Such a Night" came on followed by Lester Bowie's Brass Fantasy "I Only Have Eyes for You."

In both pieces, the music seems to disassemble and reassemble, leaving spaces between that are hard to name as they are to contain--almost as if the instruments had minds of their own.

And so as I sat in traffic I began wondering about things that disassemble and reassemble and yet make something bigger than itself.

Some time later I participated in a brief twitter exchange about curriculum as I caught up with a slew of tweets that came in while I slept the night before about a brief bit of video, Become a Mircoscope, that Thomas Steele-Maley (@steele-maley) via Roberto Greco (@rogre) tweeted out to several people. It's an inspiring 3 minutes of video, taken from a longer work, that chronicles through recollection the influence of Sr. Corita.  How to see with new eyes.  I so appreciated this tweet RT by Bo Adams (@boadams1) and tweeted by Alan Levin (@cogdog) 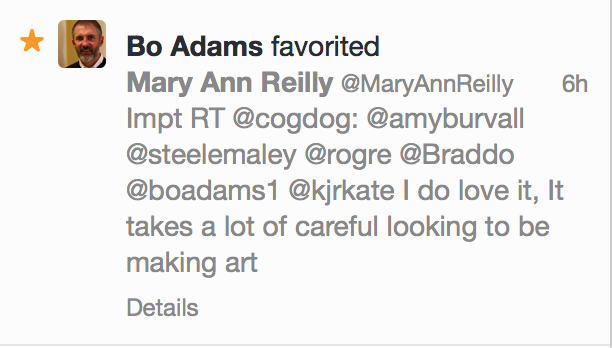 Hope you can take a few minutes to watch.

The tweets about curriculum were rather fractured to me--perhaps because I was watching Sr. Corita and thinking about disassembling and reassembling and how these twin acts keep me in the middle of things.  But the gist, as best as I can recall was the varying definitions we walk around with when we attempt to define curriculum.  Here's a bit of it: 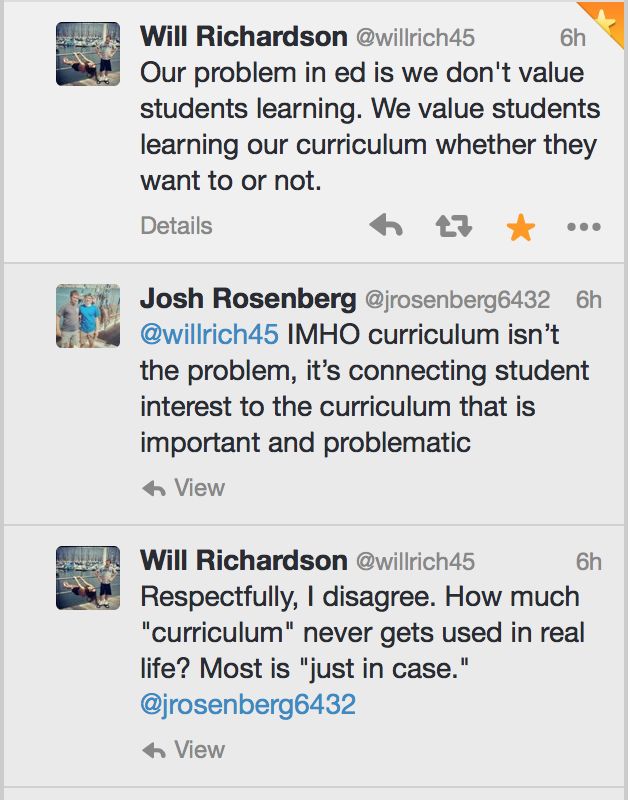 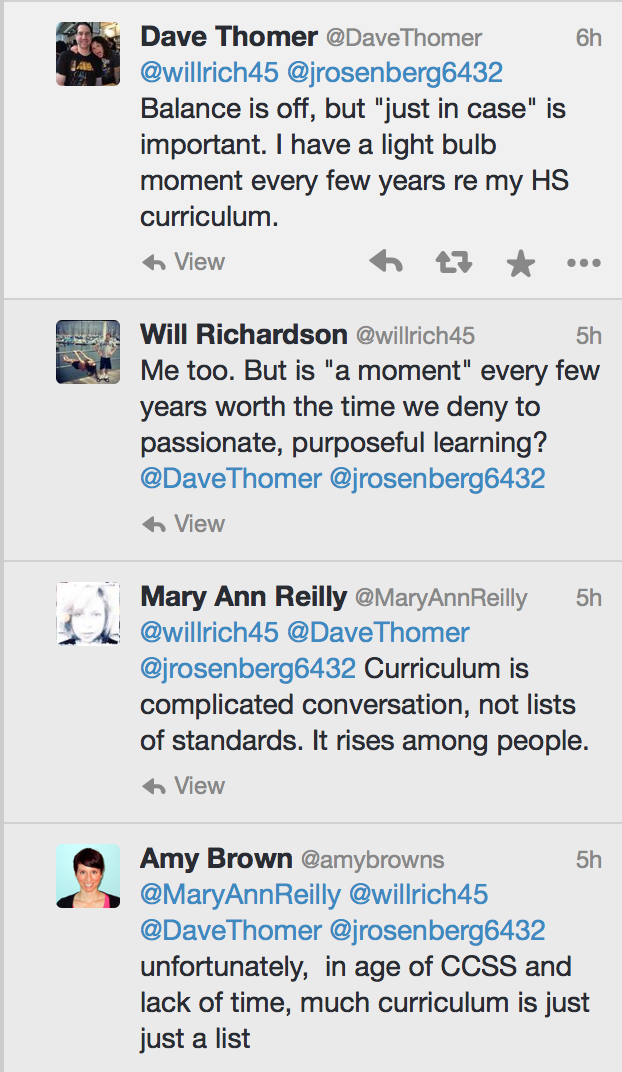 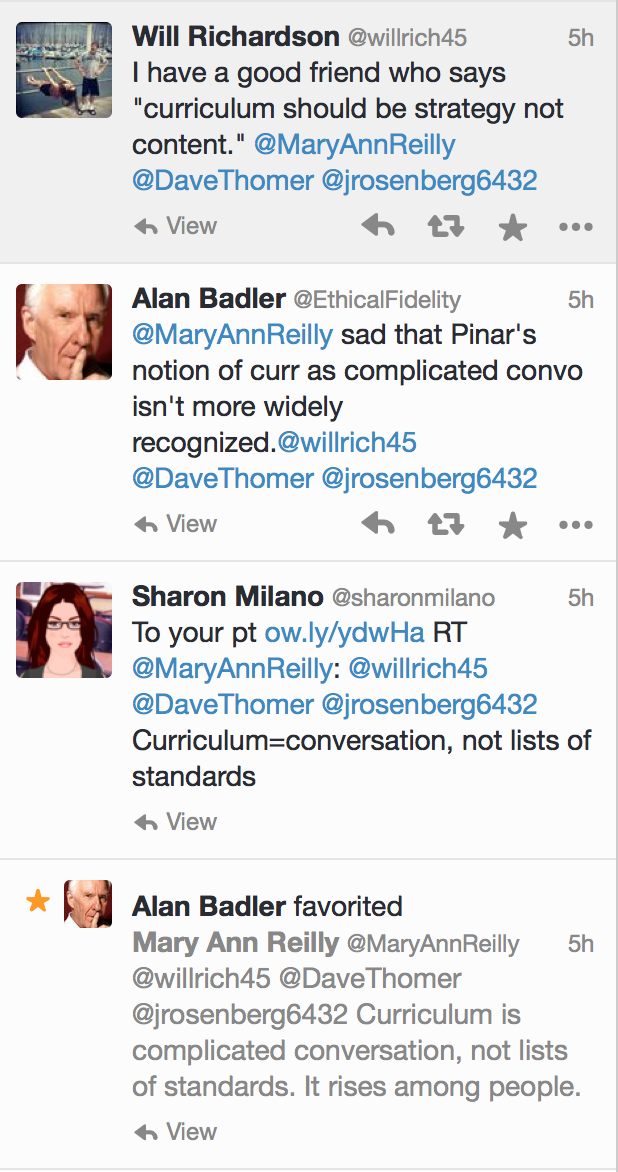 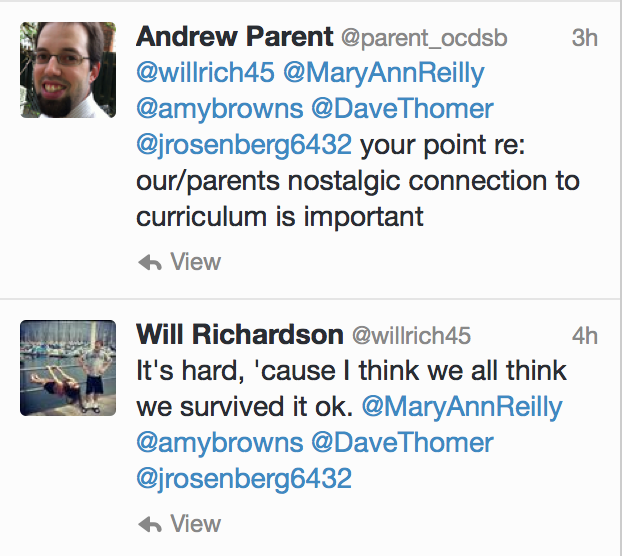 The tweets kind of reminded me of the music I had listened to earlier: How the disassembling--the taking apart leaves something less refined, something more urgent.

It's an improv about curriculum and doubt and loss.

I wondered if taking things apart & reassembling them (& the agency to do both) leads us to compose the less refined, the more urgent.

This movement then might be a way of naming curriculum as tha which we embody.


III. Curriculum and Juxtaposition and Being 15

I had almost in hand the unstable idea that these separate happenings from this morning when juxtaposed might just be something to notice--something I might want to pay attention to.

I had t in hand and then not.

And perhaps this flux, this juxtaposition of things that don't easily go together--might be my working definition of curriculum--the need to make, not only consume.  I thought about my 15-year-old son and how he is accelerating high school so that he can finish it in 3 years and "get on with it."

I want him to know about improv.

It's this getting on that I think Will (@willrich45) is on about as are others. Valuing my curriculum is really different then creatin curriculum with you to occasion your thinking, your interests and passions. It's what Sr. Corita was so on  about. It's what Maxine Greene inspired so many to embrace.

IV. Moving Out of This Time

The endless list of things to know is rather ridiculous.

We ought to just say it.