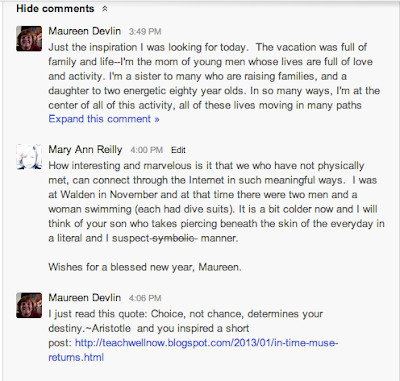 I have been thinking about layers for the last month since I had a conversation with Lolly Daskal.  I can't even recall how the idea of layers emerged as we were talking but it did and it has been on my mind.  I have been trying to understand leadership as layers and why leaders need to understand, be attentive to layers.

I tend to think in layers as I make art in layers.  Beyond that though, I have been noticing how layered my life is and in such ways that claiming it as my life seems a bit faulty.

This is not new.  Whitman said with such power years ago: For every atom belonging to me as good belongs to you.

I received a google + comment from Maureen Devlin which had me remembering layers again:


So I experimented a bit today and sent out this tweet.

Rob Greco sent back a tweet recommending an amazing pictorial essay, The Basement,  that needs to be viewed.

Karen Steffensen provided a link to a film, "Life in a Day" I had not seen and it so captivated me that I watched it  for the next 90 minutes and as I watched I painted.

Who I interact with on Twitter and Google+ becomes layers within me as well.

For the last two weeks I have been busy creating three e-books for a client that focus on read a loud books for K-2 children. One collection of texts focuses on the Himalayan Mountains. I have been dreaming about these mountains as I read book after book.  So it is not surprising that the painting I was making today should be influenced by what I have been seeing and visualizing for the last two weeks. What we read and view become layers within us too.

I had no idea what I was making as I began working. I had propped up an iPad so I could see and hear the movie and set out materials to work with.  I wanted to limit the work so I set out gesso, pages from NY Times, pan pastels, different types of brushes, painter's knives, sponges.  As I played, I began to see mountains emerging and followed that path.   It led back to the Himalayas--or at least my version of the Himalayas.

V. And This Was Going On Too

While I was working and watching the film, others were following the link that Rob had sent and were finding it fascinating too. Just think of the layers upon layers of meaning that were happening. 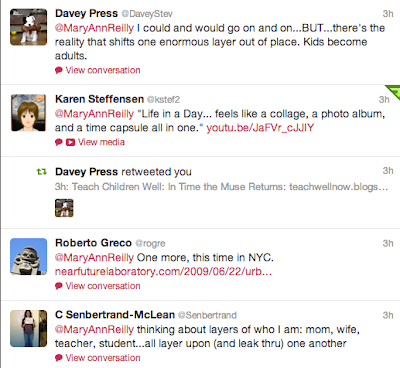 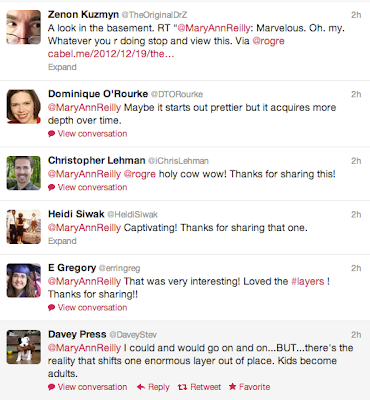 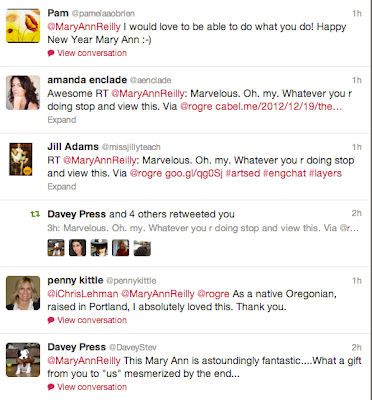 Our lives are merged and separated in ways that are hard to detail and yet within creative acts those layers are given voice.

It is this that I want to follow now.  The accidental mingling of ideas, interests, provocations sometimes leads to art that surfaces and finds traction and voice in what we create.

Creating is powerful and never truly our own.