Close Reading and the Arts: BE the Body

So much talk about close reading and the clutter of ideology obfuscates (perhaps like this sentence) meaning, intention.  The phrase, close reading, carries with it an ideological history informed by new criticism and as such, I think it a poor choice by the CCSS authors to convey the idea of attending to text with intention.

Attending with intention makes sense. Close reading offers learners one method, but not the only.

Here's a list of critical approaches we can and some of us use with/alongside and in the composing of text: 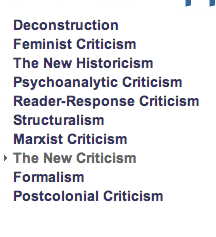 Now ask yourself: Why would 9 out of 10 methods be removed from public education and only one privileged for 13 years?  Whose voice is privileged? Muted?  In such scenarios what happens to one's language?  (Language is more important than love, for language is how we know and name love.)

Everyone lives life in a given language; everyone’s experiences therefore are had, absorbed, and recalled in that language. (Said, 1999, pp. xv!/xvi)

Why must we make children settle for so stingy a literacy, when gregarious and embodied literacies are in our hands?

We need to talk back to this single mindedness.

Method is often easier to talk about and we do that often, a lot, more than is healthy (at least for learners). It has remained, as Allan Luke terms it the not so great  'great debate.' Luke said it well:


Many of us working from sociological and cultural perspectives on literacy education have tried to change the subject of the great debate, to shift it sideways. We have argued that there is no ‘right’ way of teaching reading and writing, but that different curricular approaches – and their attendant textbooks, classroom events, assessment instruments and adjunct materials – shape literacy as social practices differently. The ways that literacies are shaped have uneven benefits for particular communities and, unfortunately, the outcomes of literacy teaching continue to favour already advantaged groups in these communities. The matter thus is not one of finding the right and correct scientific methods of teaching literacy and ‘targeting’ these at marginalised groups. Rather it is about reconstructing and realigning the ‘selective traditions’ of curriculum, instruction and assessment in ways that better address the knowledges, practices and aspirations of communities most at risk in the face of the new technologies and economic conditions.

Along with method, what also gets a bit sticky is the idea of text.


The new critics would tell us to look no further than the marks on the page: "New Critics treat a work of literature as if it were a self-contained, self-referential object" (Think epic.) David Coleman refers to this as the four corners of a book.

These are pithy statements, but are they true?

What constitutes a text? Is it merely marks made within the four corners of a text?  Can it be confined to the page, or even the page and you? Is this 'the' site for meaning making?

human intelligence and creativity, today more than ever, are tied to connecting— synchronizing— people, tools, texts, digital and social media, virtual spaces, and real spaces in the right ways, in ways that make us Minds and not just minds, but also better people in a better world.


So the text is an expression, a desire, a want  of connecting,  synchronizing readers, marks, sounds, images, gestures, and movements. I deeply believe that meaning is made, not found.

This is the poem that Louise Rosenblatt referenced: the art that happens when reader, text and intention meet.

So what does attending look like?
What does it sound like?
How does it move across a room? How do you stand inside it? Feel it?

(Shh. We mustn't forget we have bodies and sit about like big heads -- [thank you sir ken robinson for such a vital image]).


So close reading is an embodied reading--it our intention to meet word with the physicality of self and know the first through the former.

The arts open such possibility, yes?

Here's a partial list of arts-based ways of engaging the whole child in close reading.