What It Means to Know

The view suggests a horizon rather than a boundary for knowing, toward which we are always walking. --- Barry Lopez

I have been thinking about what it means to know. One of the challenges in adhering to state and/or national standards is that they often appear to be so definitive, as if knowing was simply a matter of saying so.

Barry Lopez in "The Naturalist" opens the essay talking about the habit he has of visiting the McKenzie River in western Oregon on a daily basis.  Lopez writes:


Almost every day I go down to the river with no intention but to sit and watch. I have been watching the river for thirty years, just the three or four hundred yards of it I can see from the forested bank, a run of clear, quick water about 350 feet wide. If I have learned anything here, it’s that each time I come down, something I don’t know yet will reveal itself.

If it’s a man’s intent to spend thirty years staring at a river’s environs in order to arrive at an explanation of the river, he should find some other way to spend his time. To assert this, that a river can’t be known, does not to my way of thinking denigrate science, any more than saying a brown bear can’t be completely known. The reason this is true is because the river is not a thing, in the way a Saturn V rocket engine is a thing. It is an expression of biological life, in dynamic relation to everything around it—the salmon within, the violet-green swallow swooping its surface, alder twigs floating its current, a mountain lion sipping its bank water, the configurations of basalt that break its flow and give it timbre and tone.

With the certainty of PARCC and SMARTER tests arriving at your public school soon and with them a truckload of other things for the savvy educator to buy and dispense: frameworks, professional development modules, curriculum maps (15.8 million additional $$$ awarded to both organizations to help school systems transition to the Common Core Standards)--I wonder a lot about what it means to actually know something and more importantly--to know something across time through field experiences.  Empirical immersion cannot be forgotten in lieu of cramming more and more partial bits of reading, writing and math things to know into children's heads.

Folks, that stuff rarely sticks and for good reason.


When I am by the river, therefore, I am simply there. (Barry Lopez)

I like to think of schools as places or occasions where you are intentional,  all the while feeling that there is more than you could ever encode.  In a response to an earlier post, John T. Spencer wrote:


If you believe you receive an education or that you compose an education, are the aims potentially different?

I wrestle with this question, because it feels even more elusive. Is it an acquisition? Is it a creation? Or is it about who you become? Or perhaps, even more dangerously, who you are finally allowed to be?

Call me simplistic, but it's why I end up going back to garden metaphors. Balance. Roots and rhizomes. Perennials and annuals. Aesthetic and edible. Not achievement, but still noticeable. Based upon growth, perhaps, but also looking dormant and dead at times.

I so appreciate what he wrote, especially when he said: Not achievement, but still noticeable.  Would love for that to become a national mantra.  See, it isn't one or the other.  We are always composing ourselves. It's the stuff you 'kind of know' right on the edge of language. You can almost follow it--almost name it, but then you lose the idea and you resurface a bit later somewhere else and at best, you wonder.

It is in the made connections between intentionality and tacit knowing that what it means to know becomes far less certain and far more nomadic.  This knowing about cannot easily be reduced to a list. It is something that can't be readily recorded and handed out as standards.  Rather, such knowing is nomadic, isn't it?

You will need to wander off course, to stare at a span of river across 30 years. 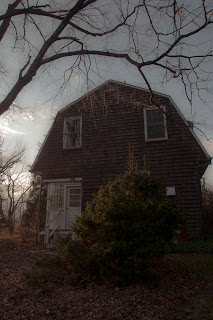 While out walking, I recently found an abandoned house that I would love to refurbish and establish the school of empirical immersion.  (Yes, a catchy name is still needed). The building is at the Skylands Botanical Gardens in Ringwood, NJ and it's backyard is the Ringwood State Forest--woods I hike in most days.  I imagine this school as a place that any young person could attend and the curriculum would be determined by those who were actually present.  At the school, learners would have come to understand different types of things alongside a few commonalities such as methods of observation, expression and problem framing.

Everything else one might learn would likely be more idiosyncratic.

There would be no mandatory subjects. No mandatory courses.  Rather, pathways would be designed, enacted, and at times abandoned.  We might be a kind of 'Robert Frost' school in so much as we know and perhaps even appreciate that way leads on to way.

Anyone know how to finance such a school?