I was thinking about the art of Katinka Matson whose work is featured at the top of this post.  She composes using organic materials, a flatbed scanner, and a computer.  Her artist statement opens:


New technologies equal new perceptions. We create tools and then mould ourselves through our use of them. - Katrinka Matson

At the same time, I had a tweet stream open and was glancing at a series of tweets that situated technological tools as being less important than a teacher's content or pedagogical aims. The argument went something like this:


Technology is just a tool. We can't forget that.
Technology just helps you to accomplish the learning. It isn't the learning.
What you are learning must come first, not the tool.

I am pretty sure that I don't agree with the premise that the technology is just a tool. Not now and really not ever, especially when we see partial signs that suggest some of us are shifting from emphasizing schooling to privileging learning anytime, anywhere and with anyone. In such a world, is the tool secondary to a teaching intention?  Does the tool shape us? Have tools always shaped us? Might it be that neither matter and matter in the same breath? Is it really about either/or, teacherly intention or tool? Could it be about both/and or perhaps neither?

Perhaps this question of which to privilege is a poor question. Consider William Carlos Williams who at the end of "Deep Religious Faith" wrote: 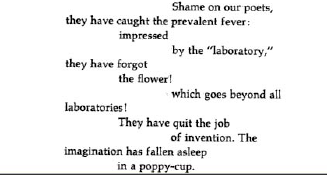 And so perhaps, as Williams tells us this matter is less the chicken and egg scenario (as to which to privilege first) and more a matter of human invention--invention that happens alongside the imagination. Technological tools are portals to invention. Beneath such arguments of which is most important remain our compelling desire to invent and to imagine.  Now Tim Seibles* knows this.  Years ago, I happened upon a poem by him, from his book,  Hurdy-Gurdy (1992, Cleveland State University Center) that remains with me and continues to inform the ways I see the world.  For me, literature is like that, it too opens portals. The poem, "Trying for Fire," speaks to co-specifying realities of maturation and invention.  Have a look:

Right now, even if a muscular woman wanted
to teach me the power of her skin
I'd probably just stand here with my hands
jammed in my pockets. Tonight
I'm feeling weak as water, watching the wind
bandage the moon. That's how it is tonight:
sky like tar, thin gauzy clouds,
a couple lame stars. A car rips by —
the driver's cigarette pinwheels past
the dog I saw hit this afternoon.
One second he was trotting along
with his wet nose tasting the air,
next thing I know he's off the curb,
a car swerves and, bam, it's over. For an instant,
he didn't seem to understand he was dying —
he lifted his head as if he might still reach
the dark-green trash bags half-open
on the other side of the street.

I wish someone could tell me
how to live in the city. My friends
just shake their heads and shrug. I
can't go to church — I'm embarrassed by things
preachers say we should believe.
I would talk to my wife, but she's worried
about the house. Whenever she listens
she hears the shingles giving in
to the rain. If I read the paper
I start believing some stranger
has got my name in his pocket —
on a matchbook next to his knife.

When I was twelve I'd take out the trash —
the garage would open like some ogre's cave
while just above my head the Monday Night Movie
stepped out of the television, and my parents
leaned back in their chairs. I can still hear
my father's voice coming through the floor,
"Boy, make sure you don't make a mess down there."
I remember the red-brick caterpillar of row houses
on Belfield Avenue and, not much higher than the rooftops,
the moon, soft and pale as a nun's thigh.

I had a plan back then--my feet were made
for football: each toe had the heart
of a different animal, so I ran
ten ways at once. I knew I'd play pro,
and live with my best friend, and
when Vanessa let us pull up her sweater
those deep-brown balloony mounds made me believe
in a world where eventually you could touch
whatever you didn't understand.

If I was afraid of anything it was
my bedroom when my parents made me
turn out the light: that knocking noise
that kept coming from the walls,
the shadow shapes by the bookshelf,
the feeling that something was always there
just waiting for me to close my eyes.
But only sleep would get me, and I'd
wake up running for my bike, my life
jingling like a little bell on the breeze.
I understood so little that I
understood it all, and I still know
what it meant to be one of the boys
who had never kissed a girl.

I never did play pro football.
I never got to do my mad-horse,
mountain goat, happy-wolf dance
for the blaring fans in the Astro Dome.
I never snagged a one-hander over the middle
against Green Bay and stole my snaky way
down the sideline for the game-breaking six.

And now, the city is crouched like a mugger
behind me — right outside, in the alley behind my door,
a man stabbed this guy for his wallet, and sometimes
I see this four-year-old with his face all bruised,
his father holding his hand like a vise. When I
turn on the radio the music is just like the news.
So, what should I do — close my eyes and hope
whatever's out there will just let me sleep?
I won't sleep tonight. I'll stay near my TV
and watch the police get everybody.

Across the street a woman is letting
her phone ring. I see her in the kitchen
stirring something on the stove, Farther off
a small dog chips the quiet with his bark.
Above me the moon looks like a nickel
in a murky little creek. This
is the same moon that saw me at twelve,
without a single bill to pay, zinging
soup can tops into the dark--I called them
flying saucers. This is the same
white light that touched dinosaurs, that
found the first people trying for fire.

It must have been very good, that moment
when wood smoke turned to flickering, when
they believed night was broken
once and for all — I wonder what almost-words
were spoken. I wonder how long
before that first flame went out.

I want to suggest here that we are at a moment in time when the wood smoke has turned to flickering and we need to recognize it as such.  Technologies, that is--anything beyond our physical selves that we use to create, to alter a given reality are old and have never been neutral.  The current ones allow those with access to compose alone or with others and to do so not only across vast geographies simultaneously, but also across time, throwing into uncertain fashion what it means to be in a present moment especially as remixing becomes more common, more easily doable.  Whose present does a collaborated upon work of art exist in?  What about works that are remixed?   I think here of Walter Benjamin who in writing about mechanical reproduction in the 1930s said: "Even the most perfect reproduction of a work of art is lacking in one element: its presence in time and space, its unique existence at the place where it happens to be."  Is remix based on mechanical reproduction an original composition existing in a specific time?

Technologies today are a type of time machine--portals to potential invention--ones that alter established borders such as social strata; political, economic, and physical geographies; ideological allegiances; and notions of time.  In doing so our use of these technologies give rise to liberation and constraint.

Technologies have never been mere tools and we would be wise to remember that. Jacques Ellul and Lewis Mumford each wrote about the machine as being anti-social and oddly this may be an even keener truth today. Ellul in The Technological Society wrote, "Capitalism did not create our world; the machine did....The machine took its place in a social milieu that was not made for it, and for that reason created the inhuman society in which we live" (p.5).  Ellul, in the same work, quotes Mumford who said, "The machine is anti-social."

The night has never been broken, for what it means to fear, to love, to want, to desire--evolves alongside the very technologies we think have freed us. The Internet is made and remade--for now an oddly inorganic thing that we compose as we are composed by it.