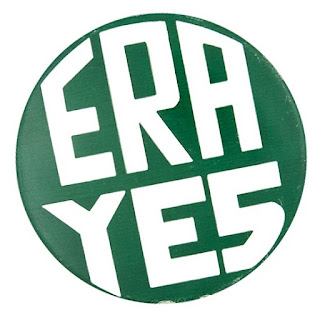 I was fortunate to grow up as a teenager during the 1970s when feminism was rising. I took my first women’s studies class in the late-1970s at college. It was a history I did not know.

During 1982, I would wear a button that read, ERA YES each day as I taught high school English. It was my first year at the high school in a more rural section of New Jersey and like all English and PE teachers there, we did lunch duty every day. During one of those days, a school administrator stopped me to ask if I was taking a survey. I must have looked confused so he clarified. “Are you asking the kids which laundry detergent they prefer: ERA or Yes?”

“No, I’m wearing this button to support the passage of the equal rights amendment.”

The ERA is brief, yet powerful statement that if passed would afford women equal protection under ten Constitution. The word, she, does not appear anywhere in the Constitution.

Here is the full text of the Equal Rights amendment:

Section 1: Equality of rights under the law shall not be denied or abridged by the United States or by any state on account of sex.Section 2: The Congress shall have the power to enforce, by appropriate legislation, the provisions of this article.Section 3: This amendment shall take effect two years after the date of ratification.

I was reminded of this as I watched the Brett Kavanaugh hearings. I heard the term, feminism spoken about and mentioned on the radio and on Twitter usually by women who mostly seem to have been tenagers during the Reagan presidency when the ERA was not ratified.

Last year I attended a lecture given by Sally Roesch Wagner about the history of feminism in this country. She provided a rich history of feminism and for the hour I sat in that audience I was filled with a hope that equity might be possible. That hole was fueled recently by the bite last Wednesday in Virginia.  There a vote on these ERA occurred 1.15.2020. Virginia became the 38th state to pass the measure. Finally, 38 states passed the measure. Trump’s (un)Justice department killed that hope when they decided that the measure could not go forth as it was dead.

Now states will need to challenge the ruling in court.

Will the USA ever see an equal rights amendment included in the Constitution?

Email ThisBlogThis!Share to TwitterShare to FacebookShare to Pinterest
Labels: ERA