America, we can be better than this

Presidents Bush and Obama are of course, gone from office. So too are responsible and ethical budgeting. In an article from The Huffington Post,  Alon Ben-Meir, a Senior Fellow Center for Global Affairs at NYU wrote (Oct. 27, 2017):


"Here is the glaring cruelty of Trump’s budget cuts. Over the next 10 years, $190 billion is being cut from the Supplemental Nutrition Assistance Program (food stamps), and $616 billion cut from Medicaid and the Children’s Health Insurance Program (CHIP). In addition, the cut from Temporary Assistance for Needy Families (welfare) is $21.6 billion. There is a proposed cut of $40.4 billion from earned-income tax credits and child tax credits."

The very programs that helped to lower the poverty level are being drastically reduced by the GOP and Trump. Instead of ensuring children have health care and food, we are building a wall that is not needed, nor will it be effective. Consider this:

"In each year from 2007 to 2014, more people joined the ranks of the illegal by remaining in the United States after their temporary visitor permits expired than by creeping across the Mexican border, according to a report by researchers at the Center for Migration Studies." (from NYT, 3.6.17) 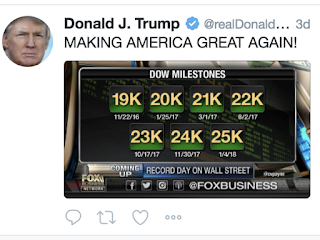 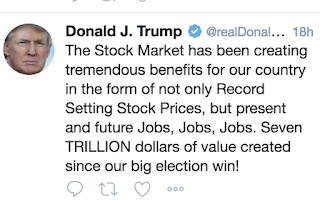 Trump's deluge of tweets suggests that market gains represent the best indicator of what makes America great. This isn’t too surprising given his wealth and the insulation that such wealth often presents. For him and other 1%ers the stock market is a fine and accurate measure of success. CNN Money (2017) reports that "88% of those making more than $1 million are in the market, which explains why the rising stock market tracks with increasing levels of inequality" (from here). Consider that "On average across the United States, only 18.7% of taxpayers directly own stocks." For average Americans and certainly for Americans who suffer from poverty, the stock market is at best an indicator of the increasing divide between the wealthy and everyone else. The stock market gains that Trump boasts benefits the richest Americans, like him.

There’s something rather amoral about budgeting decision of the Trump administration and the GOP in Washington.
They have cut government to better ensure their own financial gains and to forward their social values.


At the beginning of January (2018) Pence and his wife hosted "faith leaders." For these people, abortion is considered evil.  I wonder though where their outrage is for actual living children--those no longer in the womb? Where is their fight for those 9 million children whose health care is not being funded (CHIPS).  A month ago I heard a story on The Takeaway about a mom (Myra Gregory) and her little ten-year son, Roland, who has stage IV lung cancer. Because Congress has not funded the Children's Health Insurance Program (CHIP), her boy has had no scans since last summer and his very necessary pain meds are no longer guaranteed. He’s fighting what my husband died from at 60. Rob said the pain from the tumors on his spine was like an ice pick being driven into his back over and over. Imagine that kind of pain  being felt by a child? Pain that could be managed if Congress could find CHIPs.

Come on, America—we can do better than this.