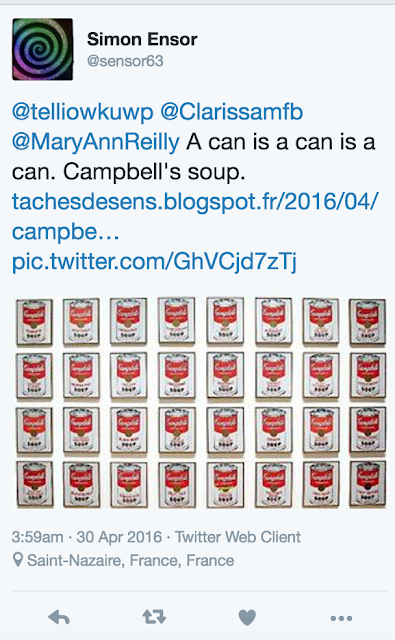 So I'm following a link Simon Ensor (@sensor63) tweeted and when I read the poem he has posted, I slow down. It's a poem about many things, the least of which is an accounting of the death of the speaker's father.

I don't want to follow the speaker up the stairs to where I know surely, death has happened. I don't want to notice what only can be known by experience. My time with Rob. My time watching my husband die is still so raw, so immediate and the details of a death at home and all that comes with it are ones I understand too well. But Simon's words are a traffic accident I cannot look away from and these words compel me to look, to notice, to do what is the most human of things--to bear witness to another's expression of grief. It is this, this bearing witness that makes us human.


"It was autumn in spring perhaps.

I backed out of the room.

I walked along the corridor.

I passed the embroidery.

My sister and my mother were sitting on the sofa.

Were they sitting on the sofa?

I never saw the corpse.

The deepest despair blooms and that is a truth about time we can hold.  For time as we name it, know it is slippery, unreliable, and irrational.  It bends to our will and rejects our most deepest wants, our most private fears. We will all die and what that means is mostly informed by what we know of time as we name it now and how the body dies. For a corpse signals the end. What remains beyond the body is less known, less understood, less rational, less comforting in the aftermath of loss. We want the corporeal.

We have made time up and said it is the Truth and organized the story of an entire universe based on this single story. Time is an arrow moving forward. Once there was nothing then there was a bang and time began.

Time is an arrow. Boltzmann told us time flows forward. This morning like most mornings, the cream I pour into my coffee mixes with ease.  It does not unmix.  Here time moves forward.  But here is not the totality of possibilities; it is only the vantage point from which we hypothesize. Julian Barbour, Tim Koslowski, and Flavio Mercarti propose that the Big Bang produces a single past with "two distinct futures emerging from it." They write, "Any internal observer must be in one half of the solution and will only be aware of the records of one branch and deduce a unique past and future direction from inspection of the available records."

Where we stand frames what we know and in doing so, what we cannot know. Imagine that death is the movement from one future to another. Time then is never just an arrow. It is a slim truth we have concocted to organize what is irrational. We live here in these three dimensions and we call that whole and yet grief lives within and beyond that if we let it.

Each death slays us as it opens us to other ways of knowing, being, loving. I know this now.  I know how Rob's death opens me to what is non-orientable, what is unnamed. We know more than we can say is a better truth than time moves forward, leaving those we have loved behind.

Some nights, I sleep in flannel pants he once wore. When it is cool and misting, I wear a flannel shirt of his when I walk outside.  It is the absence and odd clarity of memory that travels with grief that moves me most; makes me most humbled when I read posts like Simon's.  Wallace Stevens knew, like I do now that there's such courage in the saying out loud what we see in the dark.