So What's a Crime? Thinking about Protesters & Market Speculators 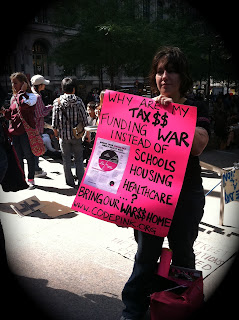 Last Monday, I visited Liberty Park in Manhattan while making my way to catch the Staten Island Ferry.  It was the day before NYC police would arrest protesters from OccupyWallStreet for criminal acts such as: writing with chalk on the sidewalk and wearing masks on the back of their heads.

The next day I was driving and had my iPod on shuffle when Kronos Quartet's "Sing Sing: J. Edgar Hoover" from Howl, U.S.A. album came on.  The composition is nearly 11 minutes and contains phrases and words uttered by J. Edgar Hoover during his 48 years as FBI director.  The audio files are part of speeches that were declassified.  A fuller explanation of the Kronos Quartet composition can be found here. 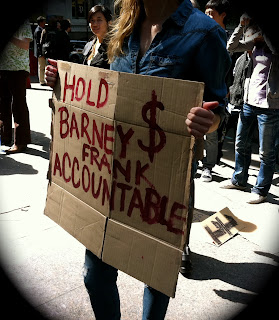 As I listened (again and again) I thought a lot about fear and crime and continued to wonder about the actions that get labeled and processed as criminal, as well as the myriad of actions that do not. Several weeks ago I read about Alan Knuckman,  a 42-year-old analyst with Agora Financials who in a story about how commodity traders at the Chicago Board of Trade (CBOT) are artifically increasing the costs of food globally in order to turn a greater profit said:

Horand Knaup, Michaela Schiessl, and Anne Seith authors of the article, How Global Investors Make Money Out of Hunger, write:

The age of cheap food is over," predicts Knuckman, noting that this can't be such a bad thing for US citizens. "Most Americans eat too much, anyway."

For his fellow Americans, who spend 13 percent of their disposable income on food, the price hike may be an annoyance. But for the world's poor, who are forced to spend 70 percent of their meager budgets on food, it's life-threatening.

Since last June alone, higher food prices have driven another 44 million people below the poverty line, reports the World Bank. These are people who must survive on less than $1.25 (€0.87) a day. More than a billion people are starving worldwide. The current famine in the Horn of Africa is not only the result of drought, civil war and corrupt officials, but is also caused by prohibitively high food prices.

Knuckman refers to the fact that the poorest of the poor can no longer pay for their food as "undesirable side effects of the market." Halima Abubakar, a 25-year-old Kenyan woman, is experiencing these supposed side effects at first hand.

She is sitting in her corrugated metal hut in Kibera, Nairobi's biggest slum, wondering what to put on the table this evening for her husband and their two children. Until now, the Abubakars were among the higher earners in Kibera. The family managed to feed itself adequately with the monthly salary of €150 that Halima's husband earns as a prison guard.
But that has suddenly become difficult. The price of corn meal, the most important food staple in Kenya, is now at a record high after increasing by more than 100 percent in only five months. Potato prices went up by a third, milk is also more expensive, and so are vegetables.

Abubakar doesn't know why this is the case. She only knows that she suddenly has to pay close attention to how she spends the family's meager daily food budget of about 300 shillings (€2.30). Her first step was to switch to a cheaper brand of corn meal. It doesn't taste of much, but at least it fills one's stomach. She sometimes goes without her own lunch so that her children can have enough to eat.

In the article, the authors state:


In 2009, the US investment bank earned more than $5 billion in commodities speculation -- more than a third of its net earnings.


"What we are experiencing is a demand shock coming from a new category of participant in the commodities futures markets," hedge fund manager Michael Masters conceded in testimony before a US Senate committee addressing the food crisis in 2008.

As long as the market is not regulated, the number of speculators making money at the expense of hungry people will continue to grow, fears UNCTAD economist Flassbeck. The consequences would be devastating. According to the World Bank, an increase of only about 10 percent in worldwide food prices results in another 10 million people slipping below the poverty line. Even though there is enough food, many die of hunger simply because they can no longer afford to pay for it.

Towards the end of the Kronos Quartet piece, the voice of J. Hoover can be heard saying:


I made the one-minute video below by remixing a small section from the Kronos Quartet piece with images I made in Manhattan of the protesters, the police, and those out and about on Wall Street.