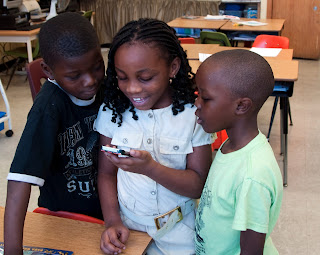 It pains me to think that in a few brief days, hundreds of five-year-olds will arrive at school and be subjected to tests. No settling in. No learning how to be a part of shiny new communities.  Rather, they will be meeting their teacher or some other adult in one-to-one situations in order for that adult to record how many letters and sounds and numbers each child can identify--as if these matters mattered more than becoming part of a class. The measures could easily and naturally be collected during the first two months of school through observations of children at play--through conversations with children as they handle books and make messages, sing and paint. Through conversation.


I asked one teacher recently why she would have to test all of the kindergarten children in her class beginning in week one and she explained that the new evaluation system of teachers required a baseline measure--one that needed to be done first thing.  Imagine a system to evaluate teachers trumping common sense.

Here are a few reasons why testing 5-year-olds in week one is counterproductive:

Administrators need to say no to such formal testing during the opening month of school.
Posted by Mary Ann Reilly at 4:30 AM