Thinking about Young Learners and iPads 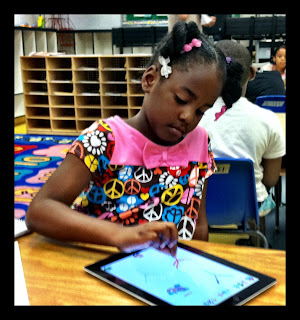 Last week I was modeling a specific type of early literacy lesson with two young children who are entering second grade and whose letter identification skills are quite poor.  Neither can identify by sound, word or name most of the letters. For one child the lesson resonated and she made steady improvement exiting reading a very early text with one-to-one matching and identifying and writing letters.  For the other child, she continued to struggle throughout the lesson and demonstrated what appeared to be an inability to actually write many letters even with a model in front of her and to have confusion about letter direction.  For example, one task she did was to put together a name puzzle.  The name was her own and she had an envelope that had her name on it as a reference if needed.  She did put all of the letters in correct order, but half were upside down.  When I had her check, she was able to correct the direction issues by checking her work against the model.

This is a 20-minute lesson that asks children to:
After the lesson, the principal and teacher who were observing and I discussed what we thought might be happening and what next steps to take. As we were talking I remembered that I had an iPad with me and loaded on it were two apps that are excellent for letter tracing and connecting letters and sounds. Although the child yawned mightily throughout the earlier lesson, I wondered how she might fare doing similar tasks but doing them on an iPad.

I asked the child if she would be interested in trying letter tracing on an iPad. She had never seen an iPad before (nor had any of the children in the classroom), but she was eager to try. I opened Alphabet Tracing, a free app, and showed her how it worked, which took less than a minute. She began to trace letters not paying attention to the guide as she worked.  I showed her letter formation (directionality to start) and pointed out the train that showed which way to trace on the guide letter.  She noticed it but did not pay attention to it.

After several letters she hit the back key and returned the beginning of the alphabet.  This time, I could see that she was watching the train to see what direction she should move her finger.  She was able to trace more than half of the letters by checking the reference and then copying it.  What felt significant is that she worked independently for about 15 minutes and was very successful. When she next looked up, I asked her if she would like to try a different letter tracing app that would ask her to say the sound of the letter as she traced and the letter name.  She said yes and I opened Intro to Letters (Montessori). In using this app, she learned that she needed to closely approximate the outline of the letter in order to be successful.  She quickly acclimated and was saying the letter sound, name and tracing it like a pro. She worked steadily for another 15 minutes completely focused on the tasks and met with much success.

I had a letter tracing book (upper and lowercase alphabet & picture) with me and asked her if she would like me to leave it so she could practice tracing using the book.  She said she would.

I am still thinking about the lesson, her response to it and her subsequent work using an iPad.  I am not sure what to make of all of it, really.  I will see her again this coming week and look forward to seeing what next occurs. Will keep you posted.
Posted by Mary Ann Reilly at 7:58 PM